“The Prince of Winterfell” is another set-up episode as Westeros (and HBO) prepare for a big season finale. The cinematic imagery and location shots were amazing but not much happened this episode. 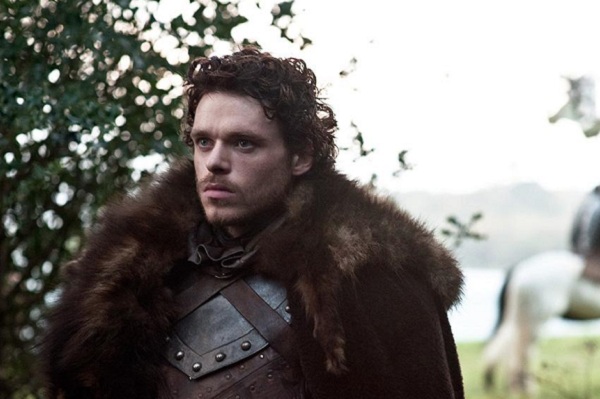 King of the North, Robb Stark

Just when I thought Game of Thrones was back on track, we’re given another nothing much happens episode.

Here is my Game of Thrones recap for this week’s episode “The Prince of Winterfell”:

Hey viewer, did you know war is coming?

Even HBO says: “the fight of the season is on its way.”

Let’s get on with it already. I understand that television shows have a mix of build-up and high drama episodes; some series pull this off masterfully (AMC’s Mad Men for example) but Season 2 of Game of Thrones was really hit and miss (with probably more misses than hits).

The last few episodes have been good but particularly gruesome. This week’s episode was more set-up — again. It’s a solid season but in the end — not much happens.

It’s demanding a lot to ask viewers to play a game that is nothing but several weeks of strategy to one big final battle at the end. Why tune it at all? Why not just see how it ends (if this, after all, just a game)?

This is where Game of Thrones could do better (the books be damned): make it enticing. Make each episode count. Season 2 gets progressively better (with the bizarre exception of the Dany Qarth scenes that don’t really work. Does Dany ever get to be the focal point of an episode?)

We did learn a few things this episode: that was not the Stark children charbroiled at the front gates of Winterfell. (It turned out to be the farmer’s boys.) Thank goodness. (Sorry farmer’s boys.)

This episode had some beautiful, sweeping, cinematic imagery as well. There was the gorgeous sunset shot of Robb Stark walking with the nurse, her scarf billowing in the breeze and he in full Medieval leather armor. The brutal winterland shots of Jon Snow tumbling down a frozen mountain imprisoned by a clan who wear animal skeletons as masks; the lady-knight transferring her prisoner, the “Kingslayer,” onto a small boat to set sail down river. The visual shots in this episode were quite cinematic.

The episode began with Theon’s tough sister riding into Winterfell to send him home for barbecuing the Stark princes (or so we thought). Thank goodness we were wrong on that. Then we had quick scenes for each character — that almost felt like episode trailer moments — where nothing much happened. We are building up to the season finale showdown.

A few highlights from this episode: Robb Stark. Finally! Yes, we get to focus on our (should-be) hero for a moment. (We could linger there longer, we don’t mind looking!) After Robb reprimands and arrests his mother for setting the Kingslayer free, he listens to his beautiful nurse tell her story and then shacks up with her. Good stuff. As I’ve been saying, we need more Robb Stark.

Tyrion. We need more of him too. The scene between him and Cersei, when she threatens him by capturing and beating his “whore” (okay, let’s just call her his girlfriend because that’s what she is and he’s in love with her, even if she lives in secret) was riveting. The look on Dinklage’s face proves his worthiness as an actor and that all of his awards were well deserved. In that scene, he deftly conveyed a mix of emotions in a glance – fear that Cersei had his mistress, absolute devastation and anger at her torture, and the desire to hide his feelings from Cersei. It was an amazing scene. Made even more fascinating when the overly-confident Cersei produced the wrong girl. She didn’t know but we knew she had the wrong “whore.” Dinklage masterfully played that as well – concealing his relief yet showing compassion for the wrong girl who had been beaten and tortured at Cersei’s orders. It is true that Tyrion is the only Lannister we like.

Speaking of Lannisters, the ever-despicable Jaime was inexplicably set free by Robb’s mother, Lady Catelyn. We see her loyal lady-knight transferring him on horseback and by boat to King’s Landing. Why is anyone’s guess. Lady Catelyn is smart so maybe she knows something we don’t. On the other hand, since the show can’t figure out what to do with Robb Stark they had to think of something and this was it. It added some drama. (As I’ve said, I haven’t read the books, so if her reasoning was more developed in the novels it wasn’t here, it was hard to discern why she did it.) I know she thinks by letting him go it will help save her children. Does she know the Lannisters? They’re in-bred wealthy royalty. Compassion isn’t part of their DNA. (Tyrion a possible exception.) Once Jaime arrives, he will begin plotting her immediate demise. That’s just how Lannisters roll. (Is Catelyn forgetting the Lannisters are the ones responsible for making her husband, Ned Stark’s, head roll? Literally? Guess so. I’m guessing all will come together in the finale and her hand will be well-played.)

Back at the dungeon that is Harrenhal, Arya cleverly makes a deal with her personal pocket-assassin. She gives a name, his, which he doesn’t want to do so she un-names him only if he will help her escape. She makes it to the gate and we cut away.

The men of the Night’s Watch were not dead but digging snow ditches where Snow’s BFF stumbles upon some ancient dragon glass weaponry. Pretty cool.

And speaking of dragons…

Poor Dany. She’s been given short shrift this season, stuck in the CGI world of Qarth. She told her man-servant to fetch her dragons and that’s where we’re at.

In the season finale, war will finally happen.

The players are treading water. Setting up strategies, spinning in place. The game is on and we await the final battle.

Whether the show ends with a bang… or a whimper… remains to be seen.

I can’t wait to watch!

Episode 18 – Inside the Episode

24 mins ago
by Giovana Gelhoren

38 mins ago
by Avery Oliver