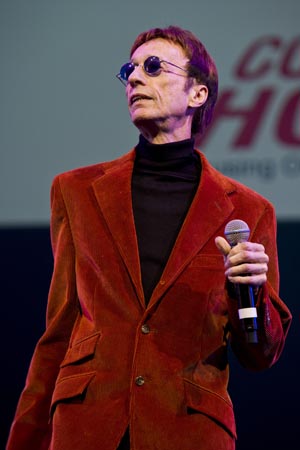 First Donna Summer, now this: Bee Gees singer Robin Gibb lost his battle with cancer on Sunday, according to his official website. He was 62.

Gibb “passed away today following his long battle with cancer and intestinal surgery,” at 10:47 a.m. in the U.K., according to the announcement. He had battled liver cancer over the past year or so and recently came out of a coma.

Gibb and brother Maurice were born in 1949 on the Isle of Man and later moved with his family, including older brother Barry Gibb and younger brother Andy Gibb, to Manchester, England. The family later moved to Australia where they first performed on television as the B.G.’s.

The family moved back to the U.K. in the 1960s and the group — comprised of Robin, Barry and Maurice — started pumping out the hits like “To Love Somebody,” “Lonely Days” and “How Can You Mend a Broken Heart.” Their heyday came during the ’70s disco era with hits like “Jive Talking,” “Stayin’ Alive,” “How Deep is Your Love” and “Saturday Night Fever” — the latter inspired a film by the same name starring John Travolta. Saturday Night Fever was the top best-selling album ever until Michael Jackson’s Thriller ousted them from the top spot.

The Gibb brothers pursued their solo careers into the ’80s, but they were eventually inducted into the Rock and Roll Hall of Fame in 1997.

Despite their disco success, Gibb said the Bee Gees’ music identified more with rhythm and blues roots. “You say that, but we didn’t think when we were writing any of our music that you would dance to it. We always thought we were writing R&B grooves, what they called blue-eyed soul,” he told New Zealand entertainment website Elsewhere in 2010. “So we never heard the word ‘disco,’ we just wrote groove songs we could harmonize strongly to, and with great melodies. The fact you could dance to them, we never thought about.”

He also gave a slight dig to other big groups of the era, saying that the Bee Gees’ songs have staying power that some of The Beatles‘ songs don’t.

“When I’m in England, Europe, New York, Los Angeles… wherever, if I turn the radio on I hear about four or five Bee Gees or Gibb brothers songs every day, but not the Beatles… and it’s because our music has got Black influences to it. People of a younger generation can relate to it, whereas the Beatles’ music is very fixed in its time, the psychedelic music of the late ’60s doesn’t quite gel,” he said.

“‘Stayin’ Alive’ doesn’t sound out of place, but ‘Strawberry Fields’ would.”

“The benchmark for getting a recording contract was much higher [back then],” he said. “Today people have [expensive] recording equipment in their front room — but it doesn’t make them songwriters or great singers or harmonizers. What it can do is make pretty bad songs sound good, for a while.”

So true, Robin. Your talent will definitely be missed.