Will Smith “time jumps” back to the summer of ’69, where Andy Warhol, a moon launch and slimy aliens all threaten the planet, not to mention his respected partner, Tommy Lee Jones. Josh Brolin is spot-on as the young Tommy Lee and steals the show despite one hideous one-armed alien called Boris the Animal. Keep your neuralizer cocked and loaded! 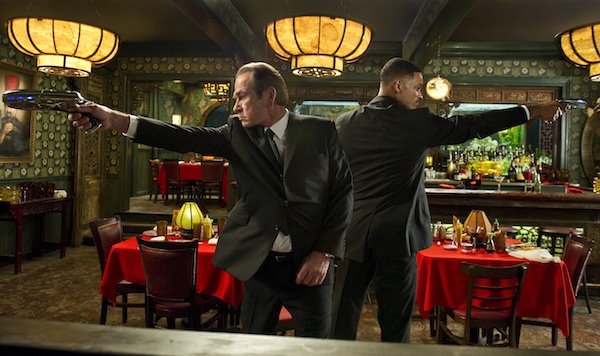 When extra-terrestrial Boris the Animal (Flight of the Conchords‘ Jemaine Clement) escapes from Lunar Max (yes, a prison on the moon), he curses the human who hacked off his arm and vows to hunt him down. But merely seeking revenge would be too conventional for this anxious alien. Boris’ plan? Travel back in time to kill the man responsible before he engages in the lamentable limb-laceration. That man being none other than Agent K (Tommy Lee Jones), of course.

When Agent J (Will Smith) shows up at the MIB headquarters, he can’t seem to find his partner anywhere. When he asks Agent O (a gorgeous Emma Thompson — did she have work done?) where he can find the grumpy Agent K, she reveals he’s been dead for 40 years. Agent J is determined to get to the bottom of this perplexing mystery, even if it means traveling back in time!

In this new extreme sport called “time jumping,” Agent J sets a handheld gadget’s target vector to 1969 and must literally jump off the top of the Chrysler Building. This is where the film has the most fun with the 3D effects and will have you holding your breath as he falls for what seems like for-freaking-ever. 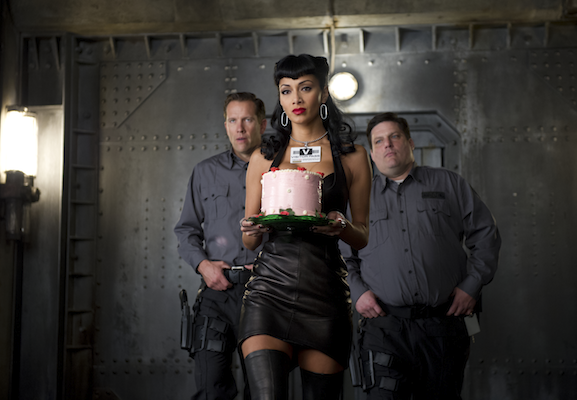 Once in the 1960s, J tells the Young Agent K that he’s from the future and has come to save his life. Surprisingly, K doesn’t question the time-jumper and they begin looking for clues.

MIB III is at its best indulging in the George-Jetson-esque 1960s and of course, a visit to a runway show at Andy Warhol’s (Bill Hader in a fake nose) The Factory is a brilliant touch. Who knew all fashion models were aliens? At one point J threatens to “pimp slap the shiznit” out of Warhol, who didn’t even kiss him. But MIB III doesn’t forget the decade’s biggest event — the mission to the moon. The film’s climax takes place at Cape Canaveral as Apollo 11 is about to blast off. 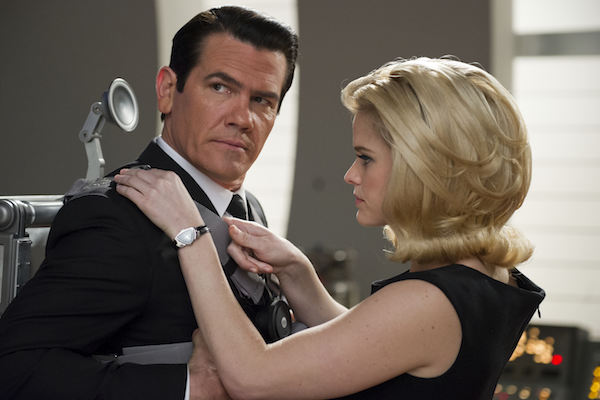 Bottom line:  This space-age three-quel delivers on mega-gross, squirmy aliens, an excellent performance by Josh Brolin and highlighting the best memories of 1969. If you’re a fan of the MIB franchise, set your target vector to a theater near you!