Amelia’s baby finally arrived, and then departed, in the season finale of Private Practice. 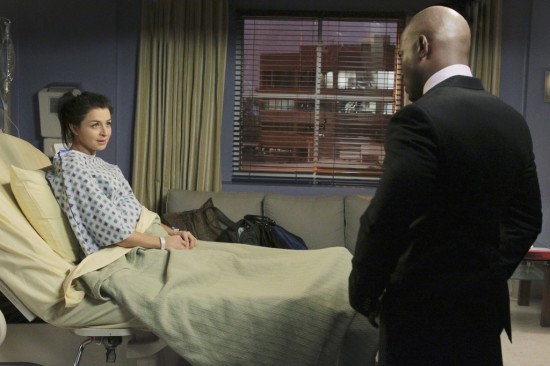 The fifth season of Private Practice came to an emotional close with Tuesday night’s “Gone, Baby, Gone,” as Amelia finally gave birth to her child and as Pete confronted the ramifications of last week’s arrest. And Addison, who opened the hour by telling her therapist she finally has “everything [she’s] ever wanted,” ended it faced with the possibility of too much of a good thing.

But let’s back up and take these stories one at a time:

Upon going into labor early in the episode, Amelia told Jake she neither wanted to see nor hear her baby after its birth. In fact, she just wanted to be wheeled out of the obstetrics floor as quickly as possible, so as not to get emotionally attached to her baby — a baby she has long been willing to donate to science, on account of his lack of a brain. But as the birth of her doomed child speedily approached, the staff of Seaside Wellness debated the ethics of Amelia’s decision. Sam, for one, wanted no part of dismantling Amelia’s offspring for parts, especially since the baby would, in fact, have a brainstem.

On the other end of the debate, Jake told everyone to stay out of Amelia’s hospital room if they couldn’t be supportive. He also begged Addison to help Sam change his mind, as the hospital would need Sam’s expertise to harvest the baby’s heart and lungs. And Charlotte, concerned how this unfolding drama could pose a legal threat for the hospital, didn’t want anyone to make a move until attorneys could be brought into the mix.

Meanwhile, Pete weathered his own legal storm after blatantly telling the courtroom he was in no way sorry for the actions he took last week. Pete’s sense of moral certitude in the face of prison time angered Violet, who has spent much of the season believing Pete will do anything to run away from facing the problems of their marriage and family.

But in the end it was Cooper who helped Pete to see reason, citing the fact that Cooper’s dear, departed wife will never even have the option of watching their son grow up. In contrast, Cooper said, Pete has a chance to spend every day with his own son and is throwing it away. Not long after this conversation, Pete expressed remorse to the court, was released on bail, and fell back into Violet’s arms. But who’s to say what the future holds for these two?

Ultimately, Sam did show up to help harvest the organs of Amelia’s child — after a particularly persuasive monologue from the soon-to-be mother — and the resolution of his inner conflict brought his own feelings about Addison into clearer focus. He does want to have a family, after all. And he wants it with Addison.

And Mason, apparently coming to terms with the death of his mother, asked Charlotte if he could call her “momma.” She, of course, agreed. He’s even thinking of becoming a doctor, too.

Amelia’s storyline closed with the new mother deciding to hold her baby, after all, for a few stolen moments before it was sent away for surgery. “Your father’s waiting for you,” she told him, as she sent him away, her eyes full of tears. And with Sam’s help, the infant’s organs were sent across the country to help dozens of children live fuller lives.

At episode’s end, moved by his own experience with Amelia and by the events of the season as a whole, Sam dropped to one knee and asked for Addison’s hand in marriage. His timing wasn’t the greatest, however, as his indecisiveness in weeks past had already prompted Addison to step up her romance with Jake. Looks like fans will have to wait until season six to see what happens next!