Is Raven-Symoné a lesbian? A new report in the National Enquirer says she’s shacking up with a woman, but she’s not talking about it. Instead, the current Broadway star wants everyone to leave her alone. 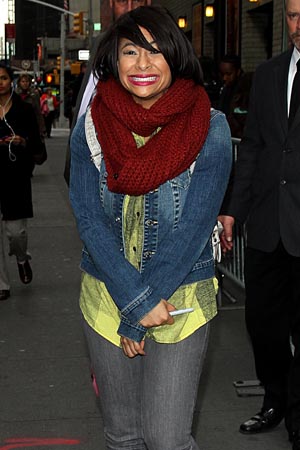 Former Cosby Show cutie Raven-Symoné was adamant in 2008 that she wasn’t in a relationship with a woman. “It’s false that I’m dating a girl right now,” she said in a statement at the time.

These days she’s not so forthcoming about her personal life. The actress — currently starring in Sister Act on Broadway — took to Twitter to tell people to butt out of her business.

“My sexual orientation is mine, and the person I’m datings to know. I’m not one for a public display of my life,” Symoné tweeted on Friday afternoon. “I’m living my PERSONAL life the way I’m happiest. I’m not one, in my 25 year career to disclose who I’m dating. and I shall not start now.”

“However that is my right as a HUMAN Being whether straight or gay. To tell or not to tell. As long as I’m not harming anyone,” she added. “I am a light being made from love. And my career is the only thing I would like to put on display, not my personal life. Kisses!”

The terse statement came after the National Enquirer published an article claiming that the actress is living with former America’s Next Top Model contestant AzMarie Livingston in her $11,000-a-month condo in New York City.

“Raven has lost almost 30 pounds, has done a whole image makeover, and now she is the star of Sister Act on Broadway,” a source told the tabloid. “She’s at a point now where she doesn’t care what her family thinks, and she’s in love with AzMarie. She’s a lesbian and wants to live that way.”

The two have only been living together for a few months, according to the source.

“The two began see­ing each other, and a few months ago, Raven finally got the nerve to ask her to move into her lavish Manhattan condo,” the source said.

She might be keeping quiet for her family — they don’t support the gay lifestyle, according to the magazine.

“She feels her parents are still trying to treat her like she’s a kid, and she’s told them she’s going to do what she wants,” the source added. “She told her parents she loves them, but her home — especially her bedroom — is nobody’s business and she was not going to back down, so they needed to accept it, period.”

Her Twitter statement makes it seem — at least to us — that she is a lesbian. We don’t care, though: She’s a talented actress who deserves happiness. Maybe someday she’ll feel confident enough to tell the truth — gay or straight — once and for all.

Do you think Raven-Symoné is a lesbian?