Sean Penn is both sad and disappointed that people — including his celebrity pals — have abandoned the Haitian people in the two years since the horrific earthquake in the island nation. Find out what he has to say about everything. 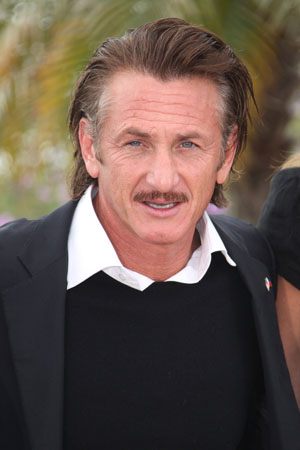 You’d think Sean Penn would be on top of the world now that he’s dating supermodel Petra Nemcova again, but you’d be wrong. The actor has the weight of the world on his shoulders and he’s upset that others aren’t helping take off some of the burden.

His main complaint? Everyone has abandoned Haiti in the two years since an earthquake ravaged the country. “It’s not only celebrities who went for a day,” Penn spat during an interview at the Cannes Film Festival Friday morning. “It’s the whole f***ing world. It’s all of you.”

Yowza! He’s got a point, though: The actor practically lives in Haiti now and works tirelessly with the rebuilding efforts — without cameras. He’s got down and dirty to solve problems, too.

“He was not a drive-by celebrity,” another Haiti activist, President Bill Clinton, said recently. “He went into those camps and he was actually solving their water problems, solving their sanitation problems.”

The actor was inspired to help after nursing his son through a traumatic brain injury. The injury — and subsequent treatments — helped Penn realize how important medications can be in helping people survive. His son recovered and went to spend time with his ex-wife, Robin Wright Penn when the earthquake happened, freeing him up to do something.

“I really found affection for what those pain medications could do to people. I had just seen his relief, and so then it was four days before the earthquake that both he and his mother had found they were ready to spend time together, so he left, which was initially kind of a 24/7 burden of eight months that I needed to break through,” he told The New York Times earlier this year.

“And then by about day four after that I was just sitting around missing him, and the earthquake happened. I was hearing about the amputations and so on without any IV pain medications, so I put a little group together, but the intention initially was just to go down and distribute those medications to the hospitals and clinics that were doing surgeries.”

At the press conference, Penn added that people don’t want to talk about Haiti anymore, but they should because there’s still a lot of work to be done. “The reason we have Haiti fatigue is because there was never a commitment in the first place,” he said.

There still is hope, though: Cannes organizers are holding a Haiti benefit on Friday night, according to TheWrap.com. “Central problem in Haiti is poverty. Paul Haggis’s group was there before the earthquake, in 2008,” Penn continued at Cannes.

“The organizations have solidarity. This is an expression and shared voice… it’s basic love between people. Mathematically Haiti has never had a chance. It’s not defined by the earthquake,” he added before calling on President Obama to take a stand for Haiti.

“It is time for our formidable and elegant president [to] stand [side] by side with the new president of Haiti.”

At least he has one ally close to him: Nemcova is active in Haitian relief organization and is even building schools in the country.