Suzanne Somers has had quite the fight with breast cancer. The beautiful Three’s Company star even had to have her breast removed to save her life. She sought out the help of a groundbreaking doctor to make her a new one — and now she can’t stop talking about it! 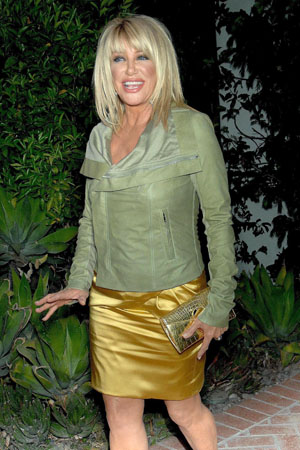 Suzanne Somers has never approached her breast cancer the traditional way, so when doctors told her to choose between breast implants or a fat graft after her mastectomy, she refused.

“‘Sew me back up,'” she recently recalled telling her doctors, according to Everyday Health. “I knew something better would come along.”

And it did: Somers enlisted the help of the Japanese doctor who invented cell-assisted lipotransfer, or CAL, to reconstruct tissues from stem cells. She underwent the procedure last summer and is now talking about her new breast in public.

“At the time when they took my breasts I didn’t want implants, I didn’t want a foreign object in my body, I didn’t want to do what they call a tram flap, which is where they cut a woman from side to side, at her hip take a muscle and blood vessel and move it up here, there’s no feeling,” she told Anderson Cooper during an appearance on his daytime talk show this week.

“I heard about a doctor in Japan, at the University of Tokyo, who had successfully regrown the breasts of over 400 Japanese women who had lost their breast to cancer. So I got a hold of him, I brought him over to America, I hooked him up with an American surgeon, we applied for an IRB, which is an Institutional Review Board, which qualified me for a clinical trial. It took me three years of trial and error, yes you can, they kept pulling it on me. In August it came through, I was able to have the surgery,” the blonde actress explained.

As for the procedure? The surgeon did end up taking some fat from her body to create the cell growth.

“They took fat from my stomach, boo-hoo, okay you can have it,” she joked. “This is lay speak in a centrifuge at supersonic speed they whipped out my stem cells, separated them, cleaned them, discarded the weak ones, took the strong ones put them in a small amount of that fat they took from me, and with lack of a better term, with a turkey baster took that concoction injected into this breast and poof, you can see it I have in on my YouTube show, they made it the size of the other one, it has feeling, it’s soft, there are no scars. I think it’s the most incredible exciting thing to happen in breast cancer in a long time.”

Doctors and other medical experts blasted Somers when she went opted for alternative treatment for her cancer instead of tried-and-true methods. She wrote books about her views — including her controversial use of human growth hormone (HGH) to keep a youthful appearance. Somers reportedly injects it into her vagina on a daily basis.

“The hormone system is like a symphony and you can put on a symphony if a lot of the players don’t show up. It sounds better with the French horns, it sounds better with the string section. If you don’t have Zubin Mehta showing up it’s all kind of discordance so that would be your thyroid, adrenal, cortisol. So, HGH is like the kiss. HGH is expensive and it’s determined by lab work if you have a deficiency,” she told Cooper. It builds bone, it builds muscle, it strengthens the heart, the pumping power of the heart. Once I started adding HGH to the concoction I don’t know, I don’t have trouble with my weight, I sleep eight hours a night. Everything is working as though my body was at its healthiest optimal prime.”

However, doctors blast her for promoting HGH for everyday use.

“Use of these products for anti-aging is based on hype, not science,” Steven Petak, M.D., of Houston, president of the American College of Endocrinology, told Self.com.

That will do little to deter Somers — she’s feeling the best she has in years, thanks to her new breast and lease on life.

“I have a hard time keeping my clothes on now,” she joked to Cooper. “if I could I would show it’s so great to have two breasts.”