The rich just get richer, don’t they? U2 lead singer Bono is now a multi-billionaire, thanks to his stake in Facebook. Just how much money will he deposit in his bank account today? 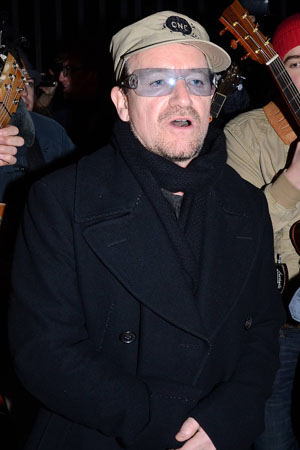 U2 lead singer and activist Bono became the world’s richest rock star in one fell swoop on Friday, thanks to his investment in Facebook. The Irish singer made $1.5 billion for the social media giant’s initial public offering — not bad, considering he invested $90 million back in 2009.

You know what that means: Bono now has enough money to buy Africa and end hunger once and for all. Well, maybe not all of Africa, but a good portion. We kid, we kid, though we do expect Bono to amp up his already considerable donations to humanitarian causes.

Bono hasn’t talked much about his new cash — instead, he’s focused on raising money for other musicians who aren’t as well off. The singer — along with producer Quincy Jones and other musicians — got together Thursday night in Harlem for a benefit, according to Rolling Stone.

“We don’t just dedicate this song to the ones who’ve passed on,” Bono said while performing U2’s “Angel of Harlem,” referring to Donna Summer’s death from cancer on Thursday morning. “Tonight we’re thinking of the ones who are still with us.”

He’s also set to get back in the studio with The Edge and the rest of his U2 partners, according to MTV.

“The band are back in the studio getting a feel for new material after the last album No Line On The Horizon,” a source told the music network. “Will.i.am had a credit on that and they are looking to explore that direction further. They have been working with Danger Mouse and RedOne. They are excited about getting to work with Carl Falk.”

We hope he finds time to swim in a pool filled entirely with $100 bills, too. That’s what we’d do, at least.