Carrie Underwood’s laundry is a matter of importance on tour. Take note, not just anyone can handle the Blown Away singer’s dirty drawers — in fact, she prefers to take matters into her own hands! 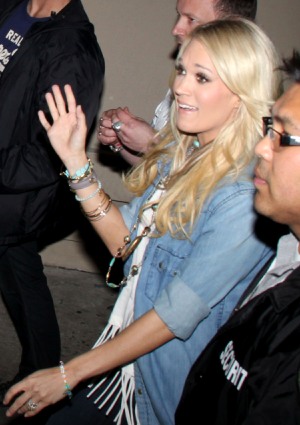 Carrie Underwood is quite the old fashioned girl when it comes to taking care of herself. Despite the abundance of help at her beck and call while out on the road, Mrs. Mike Fisher prefers her delicates are touched by no one but herself.

Carrie Underwood, whose Blown Away album was released earlier this month, spoke of her particular laundry habits while being interviewed for Oprah’s Next Chapter.

“It makes tour life a little more difficult because those are things I really don’t have time to do, so that’s what I do on my days off,” laughed the 29-year-old. “We go to the Laundromat.”

Carrie Underwood: You can’t be afraid to sound dumb >>

The process, though slightly ridiculous for a mega country star such as Underwood to perform herself, goes like this: “I get my quarters, we go to the Laundromat, and we go do our laundry. I just don’t like other people doing my laundry. It freaks me out.”

Carrie Underwood and crooner community get an apology >>

“It’s set in another time,” she explained. “It’s another one that you can see this movie play out as you listen to the song. It’s definitely one… I’ve been talking about it so much, because I think it’s one of the best well written songs I’ve ever heard in my life. So I’m amazed that I got my hands on it, but I am worried that me talking about it as much as I have been… I don’t want it to be a single, because I can’t sing it! I can’t do it! I’ve never been able to listen to it or sing it and actually get through the whole thing.”

Can you blame Carrie Underwood for her on-the-road laundry demands?