Jenelle Evans as a married woman? It’s apparently happening, for now: She’s engaged to her volatile boyfriend, Gary Head. Read on to find out about her engagement ring. 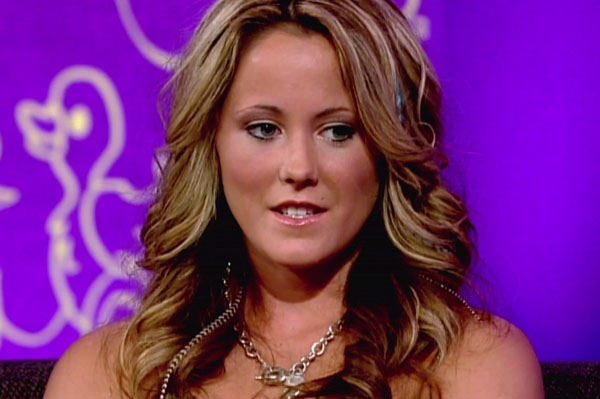 No one can really accuse Jenelle Evans of making solid, positive life choices. The Teen Mom reality star has been arrested multiple times and even gave up custody of her son, Jace, to her mother. We hoped she might get her life in order, but now we’re sure she’s as immature as ever: She’s engaged to her on-again, off-again boyfriend, Gary Head.

“Gary asked her to marry him last month,” a source told US Weekly. “She wasn’t certain about Gary and didn’t want things to be that serious between them.”

She later tweeted a photo of the diamond engagement ring she received from Head. “The ring is a princess cut solitaire diamond,” the source added. “She’s in love with him entirely.”

But she probably shouldn’t be: The plastic-chested Evans did a fan chat on May 4 and revealed that she had broken up with Head after he hit her.

“Yes, he did [hit me],” the Teen Mom star said. “He didn’t punch me, he slapped me and put me on the bed and his palm hit my jaw and it left a bruise. It wasn’t a punch though.”

The pair eventually got back together, though she temporarily hooked back up with her slacker pothead ex-boyfriend, Kieffer Delp. Head was there to take care of her while she recovered from her plastic surgery.

“Gary took care of her when she was recovering, and that made it solid to her, that he was really there for her,” the source added. Uh, cause he probably doesn’t have a job? Not that he needs one, though: Evans is still raking in the MTV cash and she’s started a side business selling products from Scentsy, a home fragrance business. However, not everyone is happy with her customer service standards — and they’re fighting with her about it on Twitter.

“Thanks to everyone for doing @PBandJenelley_1 job & helping me with my scentsy order!! You guys are the best,” Twitter user Lexie wrote, referring to Evans’ Twitter handle.

Evans claimed she just didn’t see the fan’s message about her order and threatened to report other Scentsy consultants for “stealing” her clients.

“I did help her, just becuz I didn’t see her tweet and I get 500+ mentions a day doesn’t mean I’m not doing my job,” she snarked to another consultant. “Stop trying to steal my clients or I’ll report u to compliance.”

Here’s an idea: Don’t buy products from someone you watch on television. The whole thing seems a little… off.