Matthew McConaughey’s Magic Mike striptease may not have originally been in the script, but once the actor saw a chance to take it all off he couldn’t resist! Get your dollar bills ready, ladies — and gentlemen! 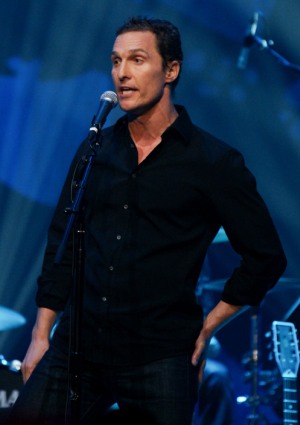 Matthew McConaughey’s thrill-seeking spirit couldn’t let an opportunity to strip on stage pass by. The Magic Mike star has opened up to the Advocate about his no-stunt-double-needed assets, and the one group he expects to come out in throngs to see the man thongs.

“Oh, it leaves something to the imagination,” Matthew McConaughey said of his striptease as Dallas in Magic Mike. “It wasn’t in the script, but Soderbergh said in the beginning that if it felt right, I could strip at the end of the movie. I said, ‘I gotta dance, man.’ I would regret it for the rest of my life if I was in a male stripper movie and didn’t get up there and strip myself.”

Though nerves threatened to keep the 42-year-old from stripping down, McConaughey’s competitive spirit eventually reigned supreme.

“At first it was scary as hell, but then it became like a drug, and I couldn’t wait to do it again,” he explained. “I also knew that my dance had to be the dirtiest. It had to be wonderfully filthy.”

His attire for the dirty dancing? Nothing more than a specially designed man thong. “It’s a great thong,” Matthew McConaughey complimented of the wardrobe work. “We took a lot of time designing it because the thong’s your armor, man. It’s your sword. Well, I guess it’s really the sheath for the sword.”

And while he doesn’t go all the way to full-frontal nudity like we hear costar Joe Manganiello does, take heart knowing McConaughey requires no body doubles for his derriere. “No way,” he said. “That’s all me up there. I don’t need a stunt a**.”

With all the man meat being touted about town, the Advocate wanted to know if the star was aware of how enthused the gay community is over Magic Mike‘s opening. “Well, I would hope and reckon so,” said McCaughey, who recently became engaged to Camila Alves. “They should be pumped, and they should come out in droves, because they won’t be let down. I think they’ll come out more excited then they came in.”

Permission for all to drool freely officially granted!

Will you be watching Matthew McConaughey strip in Magic Mike come June 29?