When a 12-year-old Khaki Scout escapes a camping trip to marry a depressive blue-eyeshadowed girl and her cat, getting struck by lightning is the least of his worries. This quirky, emotionally subtle little indie is about the pure, raw feelings of love most of us learn to squash once we hit adulthood. Wes Anderson succeeds in making us laugh as we tap into our kinder, gentler super powers… 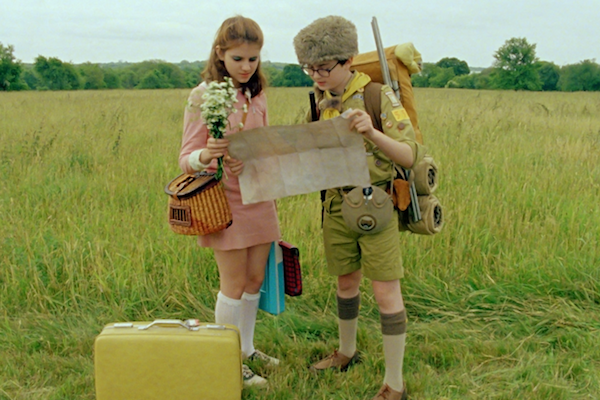 Set in 1965, many of the scenes in Moonrise Kingdom are shot in square frames, with head-on angles. This reflects the seemingly perfect New England community in which the story takes place. Compare the perpendicular world of the mainland with the jagged, irregular shape of New Penzance Island, a mystical place where emotional and physical risks are part of the rocky landscape.

Acting newcomer Jared Gilman plays Sam, a pensive boy who’s recently been orphaned by both parents. While on a camping trip with his scout troop, he flees the camp, leaving a polite letter of resignation. Interpreting this act as near treasonous, Scout Master Ward (Edward Norton) leads his troop, along with the local police chief Captain Sharp (Bruce Willis), on a rescue mission. What neither adults know is that Sam isn’t a typical runaway simply looking for attention. Sam is on a mission to find prepubescent solace with his true love Suzy (the emotionally taut and beautiful Kara Hayward), a girl with her own secrets. 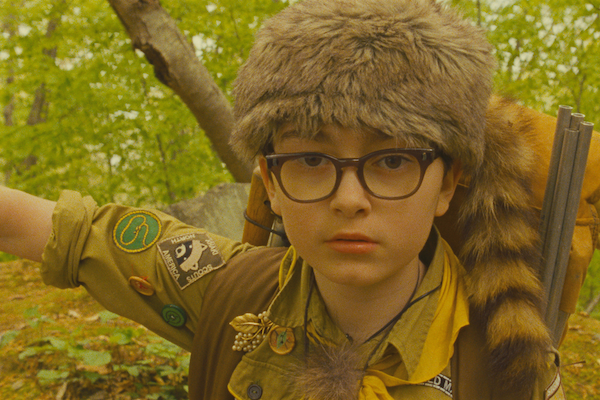 When Suzy furtively arrives on the island, she has a suitcase, a battery-operated record player, adventure novels, a basket with a kitten and her precious binoculars. Suzy looks at everything near or far through the specs and claims they are her super power. Sam is smitten, though too young to really get into any serious trouble.

My favorite scene is when the two youngsters remove their outer clothes and jump into the ocean, symbolically leaping into their future. They then dance on the beach in their underwear to French pop (Francoise Hardy’s “Le Temp de l’Amour”) on the phonograph and share a first kiss. When they adventure on to a French kiss (blame it on the music) it’s more gross than threatening, taking me back to the first time a boy shoved his tongue in my mouth — EWW! But the moment is funny, fleeting and full of promise of the carnal voyage that awaits the young couple when they are ready. For now, they are just kids yearning to know more of the world and themselves.

Soon, the young lovers are captured by Suzy’s parents, played by Frances McDormand and Bill Murray. Turns out Suzy isn’t the only woman in her family keeping secrets. Her mom is having an affair with police Captain Sharp revealing clear motivation for Suzy’s acting out.

Moonrise Kingdom is a simple story that tugs on our simplest needs — to be heard, to belong, to be loved. The children’s innocence provides a refreshing break from watching kids try to kill each other in The Hunger Games. The theme of Noah’s flood runs through the movie, perhaps implying that each and every one of us can have their sins washed away and begin anew.

Bottom line:  Restrained in blissful innocence, this is Wes Anderson at his best. While his usual eccentric characters are missing, you’ll want to run off with your cat and record player to Moonrise Kingdom. Enjoy!