You get to be annoyed before anyone else thanks this exclusive clip of the next Annoying Orange video that teams up with the characters of Madagascar 3 only on SheKnows.

Moms and kids lookout, that orange has lips

Let’s just hope it doesn’t have ears. This exclusive 30-second sneak peak includes the latest from the series of Annoying Orange videos, a YouTube phenomenon that you just have to see to believe.

Why is that orange annoying the Cartoon Network? >>

In this episode, Annoying Orange — a regular orange with the mouth, lips and voice of show creator Dane Boedigheimer — is in a circus ring with his trusty buds, Pear and Grapefruit along with a surprise visit from Peanut. Nothing could be more veggilous!

These hopeful fruits are trying to determine who’s going to play the circus bear in their new big top performance.

You’re not a bear, you’re a pear

That’s when we quickly find out that Pear makes for a terrible bear, and the audience is introduced to an animated bear named Sonya. She comes direct from a list of new characters to make their debut in the third episode of the successful Madagascar series, Madagascar 3: Europe’s Most Wanted. 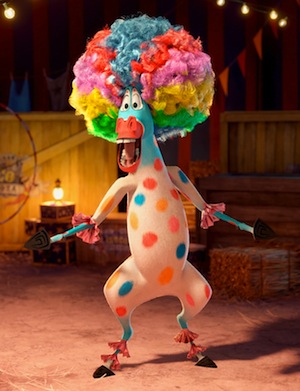 The Madagascar trilogy follows several Central Park Zoo animals who have been taken out of captivity and put back into the wild when all they want to do is get back to New York. This time, they try to get home by way of Europe and a traveling circus.

You can only guess what happens… Wackiness ensues! And, Annoying Orange has teamed up for this episode to show us how it’s done.

This bodes well for kids and moms as the Annoying Orange phenomenon continues to grow. The series currently has 2.4 million subscribers and in January of this year, it broke the 1 billion mark with views. That’s something to put lips on an orange about.

Do you find Annoying Orange annoying or simply fruit-fantastic…?