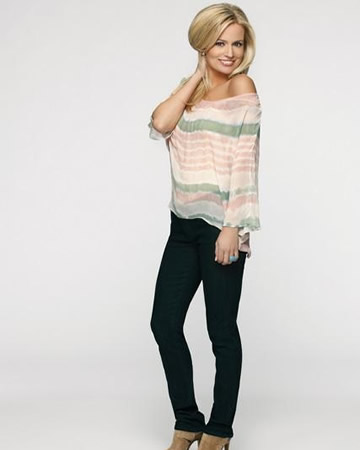 Millions watched Monday night as Bachelor favorite Emily Maynard got a second chance at love as this season’s Bachelorette. So how did the young mother enjoy the experience this time around? Emily told SheKnows she had a blast.

“I am so happy that I came back and did everything,” said Emily. “It was the best experience… getting to travel so much, and getting to give Ricki that opportunity to see everything. I learned so much about myself. I am so grateful.”

Though she couldn’t reveal whether she is currently engaged, Maynard did tell us she “couldn’t be happier” right now. She also added that she’s sticking to her plan for more children.

“I would take any [children] that I could be blessed with, but ideally, I would like four,” Emily told SheKnows. “If there’s anything I’ve learned, it’s to never bank on anything. But I hope so!”

Hopefully whoever she picks is up for a big family! It seems Emily is pretty flexible when it comes to this relationship though, telling us that she is willing to leave her home in Charlotte, North Carolina for love.

“I have to have 100 percent confidence in a relationship before I just pick up Ricki’s life and move it,” Emily said. “With that said, I would move in a heartbeat if I knew the person I was going to be with forever lived even in a different country. Ricki is happy wherever I’m happy.”

And it seems like Ricki had a great time traveling the globe with her famous mom.

“She really did become so close with the people on the crew and she loved traveling with everybody,” Emily told us. “I told her it was for a very elaborate home video that she would be able to watch way later down the road.”

Emily spills on the first night

“Honestly, I didn’t even really notice because I was so nervous. It’s really overwhelming. It really didn’t even hit me until watching it Monday night.”

On the race car driver:

“Arie is such a good guy. He could be a taxi cab driver and I wouldn’t have cared.”

On Doug and the first impression rose:

“He’s a great looking guy and so sweet. More than anything I know what it’s like to put yourself out there and take a chance at love and have to leave the biggest piece of your heart back home. The fact that he had enough faith in me to leave his son back home meant a lot to me. I wanted him to know it was not something that I took lightly.”

“Anybody that knows me knows I would take a classic pickup truck over a brand new Ferrari any day. He probably took the wrong approach. But he’s very unique, and he is who he is.”

“I definitely thought it was going to be Brad or Bentley. I was stressing out a little bit. I don’t know how I would have reacted. I’m just really glad that everybody I met was a fresh face.”

Emily added that we’re in for a treat this season, and will get to see many sides of her that we didn’t see on The Bachelor.

“I am feisty and saucy,” said Emily. “It takes a little bit for me to really feel comfortable, but I’ve never been called boring before in my everyday life.”

Be sure to catch Emily Maynard on ABC’s The Bachelorette every Monday 9/8 c.