Former Beverly Hills: 90210 co-stars Jennie Garth and Tiffani Thiessen used to be inseparable. Now? They can’t even look at one another. What happened? Let’s speculate, shall we? 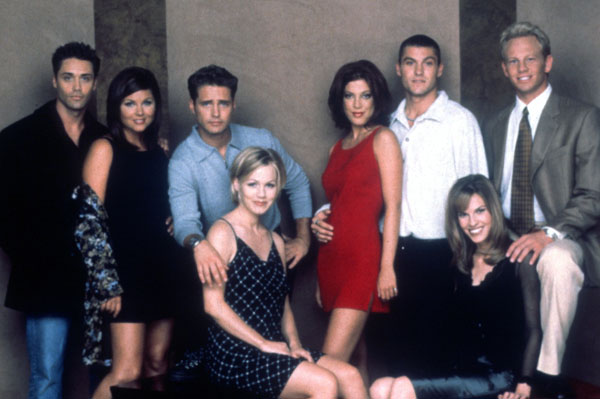 The Beverly Hills: 90210 cast had as much drama between them on-set as their characters did on the show. One of the show’s mainstays, Jennie Garth, has created — and destroyed — so many of her friendships throughout her involvement in the show.

Case in point? Her once-close relationship with Tiffani Thiessen is now frigid, according to US Weekly. Thiessen — a bridesmaid at Garth’s now-defunct marriage to Peter Facinelli — wouldn’t even interact with her former friend at an industry event in 2009.

“Finally, Jennie snapped, ‘OK? You got me?,'” the source told the magazine. “Tiffani looked sheepish and Jennie walked away. It was very awkward.”

There’s all sorts of sinister explanations for their broken friendship, including a possible love triangle between the women and Facinelli. Of course, this all happened a few years ago, so it’s probably over something completely non-related.

Garth’s relationships with former co-stars Tori Spelling and Shannen Doherty have fizzled over the years, too. However, the blonde mom of three is now on good terms with both of them. Garth’s relationship with Doherty was especially hostile — the pregnant reality star even alleged in her book, sTori Telling, that the two got into a fight on-set.

“Shannen had everything, but she could be arrogant and carefree. Jennie [Garth] was outspoken when she thought Shannen was out of line. Sometimes they got along, but there were explosions. Once they got into a fistfight,” she wrote in the 2008 tome. However, former bad girl Doherty denies it ever happened.

“I got passages sent to me and a vast majority of it is incredibly exaggerated,” Doherty told Entertainment Weekly in 2009. “No, we never punched each other.”

The trio worked together for a time on the CW’s reincarnation of 90210. Garth admitted at the time that she was worried about working with her frenemy again.

“I’m not much of a small talker, and I don’t think she is either. I was a little nervous because I hadn’t seen or talked to her in 14 years,” Garth told EW during the same interview. “Everyone was making it out to be such a big deal that I think we both fell prey to having that affect us.” With their squabbles behind them, Garth says, “I think it will be OK. We’re both grown women, both professionals. Once we were working, it felt like a good fit.”

Garth will admit one thing, though: She at least scratched her brunette co-star.

“I just remember being outside and the boys having to try to settle us down,” she said. “Scratching? I’m not going to deny that.”