The trailer for the sequel to the much loved Will Ferrell movie Anchorman: The Legend of Ron Burgundy will premiere this weekend exclusively in preview ads before Sacha Baron Cohen’s farce comedy The Dictator. 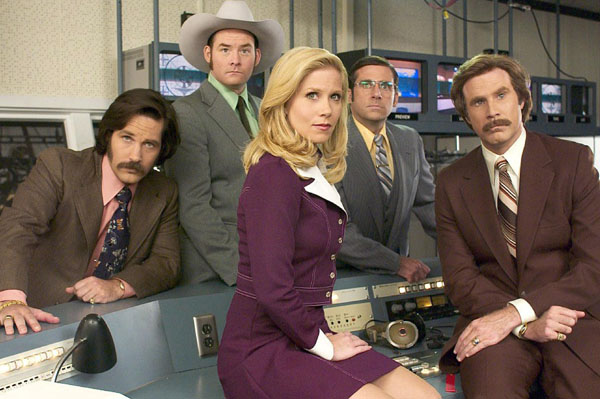 It’ll be 10 years when the long-awaited sequel to the adventures of San Diego’s (pronounced San Dee-aago, which means whale’s vagina) favorite anchorman, Ron Burgundy, comes to life with all his old friends and hopefully some new ones, too.

Anchorman 2 is set to hit theaters in 2014, but you don’t have to wait that long to catch a glimpse of the legend himself. Premiering in theaters this weekend on preview rolls ahead of Sacha Baron Cohen’s farce comedy The Dictator is the new trailer for Anchorman 2, finally on the big screen.

Since Will Ferrell made a guest appearance on Conan disguised as Burgundy himself to announce the news, the Internet has been buzzing about the much-awaited sequel, the plot of which is still under wraps.

Not only is the plot contained, but so is the cast. The listing on IMDB.com shows only Paul Rudd returning as Burgundy’s bestie Brian Fantana and Steve Carell as Brick Tamland with a rumored Luke Wilson appearance (who as we recall lost one if not two arms in the first film), but other than that, the rest of the cast remains a mystery.

Take me to Pleasure Town

If you haven’t seen the first movie (sacrelig!), Burgundy is a macho, rude, incurable (but somehow extremely likable) chauvinist who is forced to make adjustments when his television station hires a female reporter Veronica Corningstone, played by Christina Applegate, to be part of the news team.

One of our favorite quotes from Ms. Corningstone as Ron calls her is, “Mr. Harken, this city needs its news. And, you are going to deprive them of that because I have breasts? Exquisite breasts? Now, I am gonna go on, and if you want to try and stop me, bring it on. Because I am good at three things: Fighting, screwing and reading the news. I’ve already done one of those today, so what’s the other one gonna be? Huh?”

We hope Corningstone makes an appearance in Anchorman 2 as well as David Koechner as Champ Kind. And let’s not forget about Baxter. Come on, Judd Apatow, throw us a bone.

Who’s going to see The Dictator this weekend and can tell us about the Anchorman 2 trailer…?