Tyra Banks too fat? The famous model and ANTM mentor has a big round of applause for Vogue happening in an open letter to models about weight. 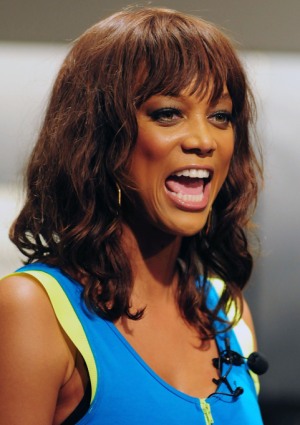 It may be hard to believe that Tyra Banks would ever have been considered too fat, but the America’s Next Top Model guru insists if she were trying to get a modeling career off the ground today she’d be shut down.

In an open letter posted on The Daily Beast, Tyra Banks shares her thoughts on weight in the industry where image rules all.

Tyra Banks’ open letter begins, “To models around the world, I want to celebrate Vogue’s recent groundbreaking announcement. The editors of Vogue’s 19 international editions have pledged to ban models from their pages who ‘appear to have an eating disorder,’ to create healthy backstage working conditions, as well as several other revolutionary initiatives. This calls for a toast over some barbecue and burgers!”

The 38-year-old went on to say, “When I started modeling, I used to see models who seemed unhealthy backstage at fashion shows. They appeared to be abusing their bodies to maintain a certain weight. These girls were booked over and over again for countless fashion shows and photo shoots… At times, I feel there’s an unspoken rule that says, ‘there’s no such thing as being too thin, as long as you don’t pass out.'”

Referring back to her younger days in the modeling industry Tyra Banks shared, “In my early 20s I was a size four. But then I started to get curvy. My agency gave my mom a list of designers that didn’t want to book me in their fashion shows anymore. In order to continue working, I would’ve had to fight Mother Nature and get used to depriving myself of nutrition.”

“As my mom wiped the tears from my face, she said, ‘Tyra, you know what we’re going to do about this? We’re going to go eat pizza.’ We sat in a tiny pizzeria in Milan and strategized about how to turn my curves into a curveball. In a way, it was my decision not to starve myself that turned me into a supermodel, and later on, a businesswoman.”

On the subject of her own weight Tyra Banks went on to write, “The truth is that if I was just starting to model at age 17 in 2012, I could not have had the career that I did. I would’ve been considered too heavy. In my time, the average model’s size was a four or six. Today you are expected to be a size zero. When I started out, I didn’t know such a size even existed.”

So what are we to do? The ANTM creator, who considers herself a mentor to young models, advised, “There needs to be more industrywide protections for models, and we need to be more consistent with what the acting world does: Protect our minors, as well as the health and well-being of models.”

Are you surprised to hear Tyra Banks admit she’d be considered too fat to start modeling now?