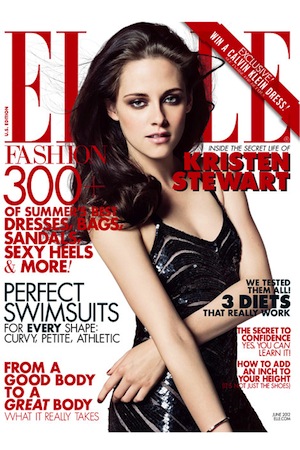 So what’s life like for Kristen Stewart? Seemingly charming and easy. Kristen grieves over her lack of negative life experiences and sheltered upbringing. “You can learn so much from bad things. I feel boring. I feel like, ‘Why is everything so easy for me?’ I can’t wait for something crazy to f***ing happen to me. Just life. I want someone to f*** me over! Do you know what I mean?”

Stewart stars in the upcoming film Snow White and the Huntsman and its success might determine if Stewart’s movies are commercially viable outside of the Twilight franchise. Stewart’s love of movies dates back to her childhood. Her mother was a Hollywood script supervisor. “I would stay up and wait for her. I wasn’t even big enough to hug her yet. I would just run and wrap myself around her leg. I loved going through her bag. There was such a particular smell. That’s a real sensory memory for me. I was always wondering like, ‘Where were you today?’ I know that’s why I’ve always been like, ‘Wow! Movies!'”

Kristen Stewart again circles back to her easy life in the Elle interview. She says her choice of characters is done purposefully to give her a chance to experience life in new ways, since her own life is predictable and comfortable. “It’s one of the reasons I want to act. I love living in different worlds, because a lot of times mine is pretty nice and easy.”

You can catch Kristen Stewart in Snow White and the Huntsman in theaters June 1, 2012.