Rachel Uchitel is on her way to a simpler, happier life: She just gave birth her first child, a daughter, with new husband Matt Hahn. Find out what she named her little girl! 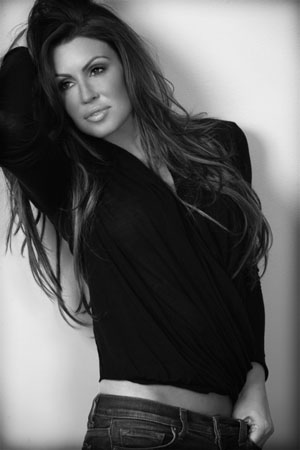 Can one of the most notorious “other woman” in sports history make the successful transition to soccer mom? Well, we’re about to find out: Tiger Woods’ ex-mistress, Rachel Uchitel, just gave birth to her first daughter on Tuesday, her rep told SheKnows.

“Rachel Uchitel gave birth to a healthy and beautiful baby girl weighing 7lbs 1oz at 5:04 pm today, Tuesday, May 15th. Both Rachel and baby are resting comfortably,” her publicist said.

Uchitel married her financier hubby last fall and found out they were pregnant soon after, according to a source.

“She found out she was pregnant when she auditioned for The Amazing Race. [She and Matt] were going to try out to be a couple on the show, and when she had a drug test, it came back positive that she’s pregnant!” a source told InTouch earlier this year.

The former NYC party circuit stable gained notoriety in 2009 when she was outed as one of Tiger Woods’ many mistresses. She later admitted to having an affair with Bones actor David Boreanaz — and he was married too! However, the reality star said her personal demons stemmed from losing her then-fiancé, Andy O’Grady, in the World Trade Center on Sept. 11, 2001.

“The last time the country really came together as one, as a family, to support one another and put aside any internal conflicts was September 11, 2001,” Uchitel said in a statement last May. “With the announcement that bin Laden has been killed, America has finally come together again as one, but in celebration rather than in mourning. This is the biggest news we have received as a country in almost 10 years. Now we Americans finally have justice and maybe we can all sleep just a bit better at night. Andy would be so honored to know he’s part of history as an American hero for his sacrifice on that day. He’s celebrating for sure right now with all those he died with and that makes me so happy.”

We hope Uchitel’s new baby gives her the kind of love and peace she’s been hoping for. If not, well, we’ll definitely be hearing about it!