Lauryn Hill’s ex is getting hitched! Rohan Marley and Brazilian model Isabeli Fontana are getting married, making for a blended family of nine kids — including two named Zion! 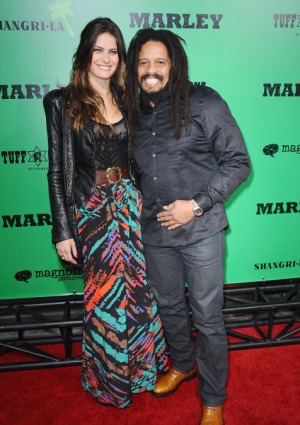 When Lauryn Hill‘s ex, Rohan Marley, and Isabeli Fontana say “I do” they’ll officially become parents of a big, blended brood — a little bit hers and a whole lot his.

Isabeli Fontana, pictured here with Rohan Marley in April, has announced her engagement to a Brazilian magazine. The 28-year-old model, who has been married twice before, is the mother of two boys: 9-year-old Zion and 5-year-old Lucas.

Lauryn Hill’s ex, Rohan Marley, is the father of seven. The 39-year-old had a daughter named Eden and a son named Nicolas during his first marriage to college love Geraldine Khawly.

In 1996 the son of reggae legend Bob Marley met Lauryn Hill. The pair went on to have five children together: Zion, Selah, Joshua, John and Sarah.

Following? To recap, when Rohan Marley and Isabeli Fontana wed they will become the parents of nine. As sorted by age they are: Eden, Nicolas, Zion, Zion, Selah, Joshua, John, Lucas and Sarah.

Isabeli Fontana went on to tell the magazine she and Marley are considering tying the knot in Ethiopia, where the Rastafarian movement was founded. ”Rohan told me we have to return to the roots so the marriage will last forever,” the model told Veja magazine.

No word yet on if the engaged pair plan to have children of their own, nor comment from Lauryn Hill on her ex’s engagement.

Isabeli Fontana’s mother had something to say, however, telling the press, “I think everything is happening too fast, but everything has a different rhythm with Isabeli.”