Wouldn’t you love to see Ian Somerhalder and girlfriend/co-star Nina Dobrev get hot and heavy together in a film adaptation of the steamy novel Fifty Shades of Grey? Don’t hold your breath. 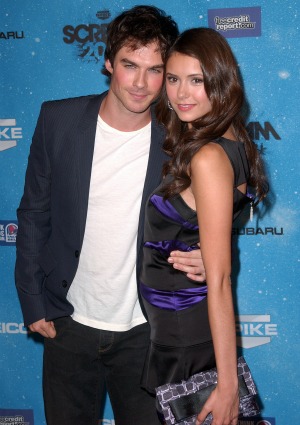 Ian Somerhalder totally wants to play smoldering sexpot Christian Grey in whatever film adaptation of the hit light S&M novel Fifty Shades of Grey might be made — but someone very close to the actor isn’t so keen on the idea.

Somerhalder has expressed a huge amount of interest in the role, telling Ryan Seacrest last month, “I absolutely would be up for that. It could be very, very amazing,” Somerhalder said. “I have the book and I just started reading it. That would be a pretty incredible thing, and hopefully that could pan out.”

“Beyond the shadow of a doubt, I think that would be a phenomenal opportunity!”

The actor’s Vampire Diaries co-star and real life girlfriend Nina Dobrev is rumored to be under consideration to play Grey’s submissive sex partner Anastasia Steele, but frankly she isn’t too keen on it.

Nina Dobrev on Ian Somerhalder’s Desire to be in Fifty Shades of Grey: “I Bought Him the Book” >>

“I don’t know if that’s a good idea,” she told MTV News. “I think it’s best for any of the actors on the Vampire Diaries to kind of do their own things… and create new characters. And as much as you try when you shoot a movie, if it’s two of the same people, the fans will always see you as… they’ll see me as Elena and they’ll see him as Damon if we do a film together.”

“I think it would be better [if] either he should get it or I should get it,” she said. “I know that apparently he’s really great for the role, so I hope that he gets it.”

Harumph. That’s a bummer, because seeing these two get down and dirty on-screen would totes give fans a peek at what they’re like under the sheets in real life, wouldn’t it? She’s such a party pooper.