Let the backstabbing begin! ABC has released a soapy, drama-filled trailer for their upcoming series, Nashville. It features Connie Britton and Hayden Panettiere as rival country music singers. Watch as they battle it out for fame, fans and even men. 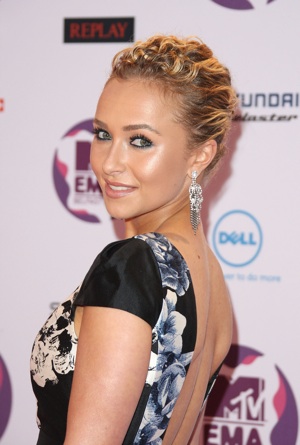 ABC has released the first promo for their new drama, Nashville. It’s set against the backdrop of the country music scene and stars Connie Britton (American Horror Story) as a Faith Hill-type who’s trying to balance her career, family and depleting fame.

Britton plays Rayna James, a veteran singer forced to mentor an up-and-comer to stay relevant in the industry. Unfortunately, her apprentice is the sultry and ambitious starlet Juliette Barnes, played by Hayden Panettiere (Heroes, Scream 4).

Not only does Juliette want Rayna’s fame, but she also wants her husband. Juliette’s a serious man-eater and makes no qualms about it. With a supporting cast that includes Jonathan Jackson (General Hospital), Eric Close (Without a Trace) and Powers Boothe (24), Nashville will be one to watch.

If you liked Gwyneth Paltrow‘s Country Strong, and Bette Davis’ All About Eve, this series is for you. It’s a tale as old as time. At some point, the student always attempts to become the teacher.

Nashville will debut this fall and take over Revenge’s Wednesday time slot. But don’t worry, ABC’s not getting rid of the Emily VanCamp drama. The series is moving to Sundays at 9 p.m. ET/PT. It will fill the void left by the now defunct Desperate Housewives.

Check out the first trailer for ABC’s Nashville below:

Nashville will air Wednesdays at 10 p.m. ET/PT on ABC.