Tom Cruise reveals a lot about himself in a new interview with Playboy magazine. The biggest revelation? He has no qualms about suing you if you talk false crap about him (publicly). 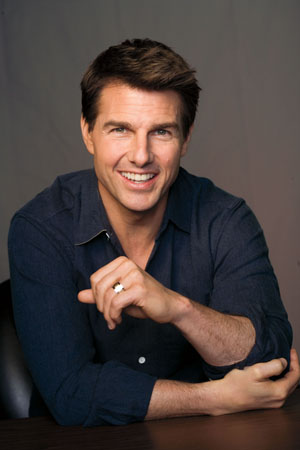 Tom Cruise is a lot of things: Handsome, devout, talented, a little bit insane — and he knows it. The actor — gearing up for his starring role as a rocker in the upcoming Rock of Ages — sat down with Playboy magazine for a no-holds-barred interview. The main topics of conversation? His penchant for lawsuits, Scientology, plastic surgery and, of course, Katie Holmes.

The actor has to be used to the awful things people write and say about him, right? Nope! He’s more than willing to sue those who spew lies.

“They know I mean it, that if I have to, I will sue,” Cruise told Playboy. “Does refuting things help? Not really. There comes a point when you just have to go, ‘You know what? Here’s how I’ve lived my life: I’ve never been late to a set. I make films I believe in. I feel privileged to be able to do what I love.’ You just have to keep going and remember that.”

As for the rumors about him? You know, that he’s gay, crazy, etc.?

“I hear it, I read it, I get it,” he says, “But life is not a matter of trying to prove anything to anybody.”

He also understands how people feel about the Church of Scientology, though he’s unapologetic about it.

“If I don’t talk about my religion, if I say I’m not discussing it or different humanitarian things I’m working on, they’re like, ‘He’s avoiding it.’ If I do talk about it, it becomes, ‘Oh, he’s proselytizing,'” he said.

“I have respect for what other people believe. What I believe in my own life is that it’s a search for how I can do things better, whether it’s being a better man or a better father or finding ways for myself to improve. Individuals have to decide what is true and real for them. I’m fortunate in the life I have.”

The life he has now includes Holmes and their diva daughter, Suri Cruise. Oh, and he can’t say enough good things about his wife.

“[She] is an extraordinary person, and if you spent five minutes with her, you’d see it. Everything she does, she does with this beautiful creativity,” Cruise gushed, adding that she’s “funny and charming, and when she walks into the room, I just feel better. I’m a romantic. I like doing things like creating romantic dinners, and she enjoys that. I don’t know what to say — I’m just happy, and I have been since the moment I met her. What we have is very special.”

Oh, and plastic surgery? No way, he says.

“I haven’t, and I never would,” Cruise said of going under the knife. Instead, he credits his youthful appearance to his lifestyle.

“I’m always with family. I train, go without sleep. I just go hard.”