Though Anna Kendrick’s character gets unwittingly knocked up in What to Expect When You’re Expecting, she’s quite excited about the idea. The actress tells SheKnows though, in real life, kids are not in the cards.

What to Expect When You’re Expecting exposes many of the uncomfortable parts of pregnancy, which surprisingly didn’t scare off too many of the movie’s stars. Anna Kendrick however, had no intention of trying out the “miracle of birth” in the first place.

“I was not super keen on the idea going into it, and coming out of it, was scary,” Anna told SheKnows at the What to Expect press day in Los Angeles recently.

When questioned whether he’s been scared off by the film, the hunky Gossip Girl star told us, “No. I’m still a little indifferent about it, until I have to face it one day.” 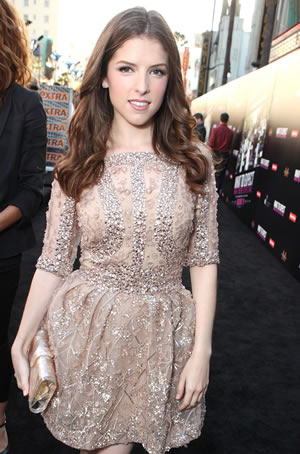 The young star Anna Kendrick at the premiere of her new movie, What to Expect When You’re Expecting.

Perhaps Kendrick is afraid of the payback she’ll get from her children for anything bad she did as a kid. Anna revealed that she was a bit of a menace as a child, and likes to still remind her mom of it.

“Last [Mother’s Day] I sent my mom a bunch of cookies with annoying things that I used to say as a kid written on them,” Anna told SheKnows. “I was like, ‘I’m still bugging you even on Mother’s Day, even as a grown up.'”

Crawford though seems like he was well-behaved as a child and has taken all his mother’s lessons to heart. The actor admitted he still follows some of his mother’s advice.

“Stand up straight, always look before you cross the street, the usual,” said Crawford.

Anna took away a much different lesson…

“Make stacks, get b****es,” Anna said, when asked the most valuable lesson she learned from mom.

Be sure to catch Anna Kendrick and Chase Crawford in What to Expect When You’re Expecting in theaters today!