Cameron Diaz plays a high-energy fitness host in the pregnancy comedy What to Expect When You’re Expecting. While the actress told SheKnows it was not an easy experience, her co-star Matthew Morrison thought the whole thing looked like a blast!

It may have been fake, but boy does Cameron Diaz pull off a pregnant belly!

“It’s a custom fit,” said Cameron of the huge prosthetic stomach she sported for her role in What to Expect When You’re Expecting. “We did a body cast.”

In the film Diaz has to perform a number of complicated activities with the belly on, including squats and hosting a reality show. But the fit actress took it all in stride.

“I’ve done more difficult things in life,” Cameron told SheKnows. “When it was under clothing it was just snapped on, but the part where it was showing it was glued on and I couldn’t take that off. You get the gist of the situation, you’re limited.” 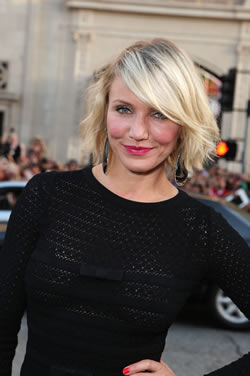 Cameron Diaz looking fierce at the premiere of What to Expect When You’re Expecting.

Cam’s co-star, Glee‘s Matthew Morrison, on the other hand seemed to look at the appendage as a sort of toy.

“I wish I would have glued it on!” he laughed to SheKnows. “I probably would have done stupid stuff like tried to bounce on it.”

Don’t trust this one around any pregnant women! Cameron though, told us she is quite prepared for the real experience, having gone through it with many friends and family members.

“I see it in real life with my friends and with my sister,” said Cameron. “It’s a challenge being human period. Then being a human, and being responsible for another human, it’s really difficult. That’s a hard job but people like doing it, apparently. We keep doing it.”

Does that mean we can expect a mini Diaz running around anytime soon? We sure hope so!

Be sure to catch Cameron Diaz and Matthew Morrison in What to Expect When You’re Expecting in theaters today!