President Barack Obama stopped by The View on Tuesday to talk about everything from gay marriage to Joe Biden. So, how does he really feel about his gaffe-prone vice president? 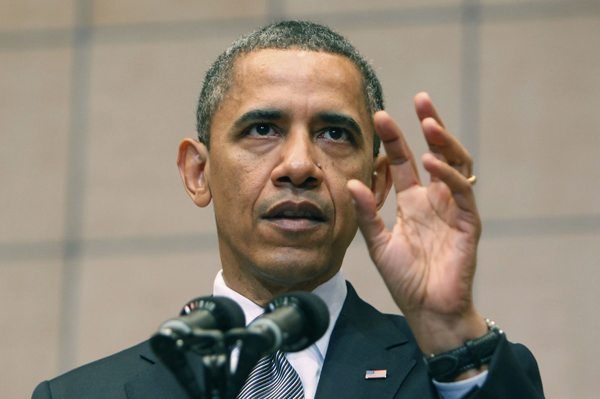 You know those moments when you say something stupid? We usually refer to that as putting your foot in your mouth, but we should start calling it “pulling a Joe Biden.” The toothy vice president is known for speaking before thinking — remember his comment a few weeks ago about President Obama have a big stick? Exactly.

VP Biden’s ill-timed statements have had an affect on the president, too — he was forced to move up his support of gay marriage announcement after Biden announced that the Obama administration was for it. The prez revealed on The View Tuesday that he actually wanted to wait until his appearance on the show to do it. Obama has visited the show several times before and during his stint as president — and he always seems at home on their couches.

“It was a possibility. It was,” he told Whoopi Goldberg, Joy Behar and the rest of the ladies. “We had been discussing it for a few weeks and we thought, what are the formats where we could talk about it not just as a policy issue but as a personal issue and all of you came to mind.”

However, Obama added that he’s not upset with his number two.

“When you get to know Joe Biden, he is the most honest, straightforward guy,” Obama said. “He’s warm; he tells you what he thinks. We talked about it and what I said was I’m never going to blame anybody for telling what they believe.”

“I think it’s important for everybody in my administration to feel like, you know, we want to be disciplined, we want to make sure we’re getting the message out there but at the same time, on issues of principle, you know, I always admire people who go ahead and speak their minds,” Obama added.

The prez sings sexy songs to Michelle Obama all the time >>

Obama talks election on The View

The president then went into campaign mode, blasting his opponent for the GOP stance on gay marriage.

“Mitt Romney has said he wants a constitutional amendment [against gay marriage],” Obama said. “That federalized the whole issue. He would defend the Defense of Marriage Act. So there are real differences here.”

He also doesn’t think it will affect his votes at the polls come November.

“What will determine the election is the economy and whether everybody — gay, straight, black, white, Hispanic, Latino, Native American, disabled, you name it — whether people feel as if America continues to be this extraordinary land of opportunity and there’s this very stark differences, legit differences between the candidates and between the parties in terms of how we are going to make sure that everybody in this country gets a fair shot, every kid is getting a great education, how we create businesses, how we create more jobs — that ultimately is going to be what determines how this election goes,” he said.