Melanie Gideon explores marriage and stagnation in Wife 22, her first adult novel. Readers will find themselves engrossed in the lives of her realistic and easy-to-relate-to characters. 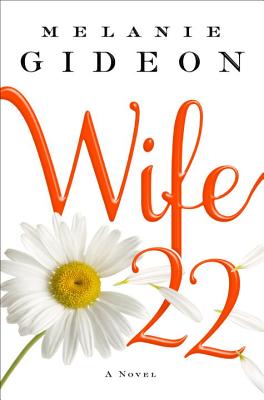 From the outside, Alice Buckle’s life seems to be going very well — her husband is successful, she has a job she loves, they have two relatively well-adjusted teenagers and she and her husband are still married after 20 years. The reality is somewhat different though. For one thing, Alice’s husband William is at the end of his rope with his job and will not be employed there much longer. Alice is also stagnating in her job as an elementary school drama teacher, and the parents of her third graders aren’t about to let her get away with it. Then there are her kids — Alice is fairly certain that her son is gay, which she embraces, and that her daughter has an eating disorder, which she does not embrace. And perhaps at the root of all Alice’s psychological distress, her marriage is not what it used to be. “Roommates” seems a more apt description for William and Alice than does “spouses” or “lovers.” Of course, roommates tend to actually talk to one another, something that Alice and William don’t do much anymore.

With all this swirling around her, it is of little surprise that Alice agrees to participate in the anonymous marriage study that shows up in her inbox. She is given the pseudonym Wife 22 and assigned to the friendly and warm Researcher 101. Initially, she simply answers Researcher 101’s questions, but as she truly examines her own life, she finds herself drawn to this man who reminds her of the relationship that she and William once had and all of the things that have been lost between them over the years.

Told through the marriage survey, emails, Google searches, Facebook status updates and traditional prose, Wife 22 is a fresh, funny take on the realities of life and marriage, especially in our digital age. Melanie Gideon works technological communication into her story beautifully. The use of Alice’s answers to the questionnaire employed in the marriage survey is particularly effective. The questions are listed in an appendix in the back of the book and provide additional insight for the reader who goes back at the end and matches them up, but having only the answers in the book proper allows readers to piece together Alice and William’s relationship like a puzzle, making for a fascinating reading experience.

Alice is a very engaging character, and anyone who is or ever has been in a relationship is likely to identify with her and her situation. Pick up Wife 22 and you won’t want to put it down until you’ve reached the last page.

Adventures in eReading: Worth the download
SheKnows book review: In My Father’s Country by Saima Wahab
Must-read: Prosper in Love by Deborah Michel