Welcome home, Matthew Perry! The seasoned Friends actor returns to NBC with a brand new show. Will he ever reunite with the Central Perk crew again? 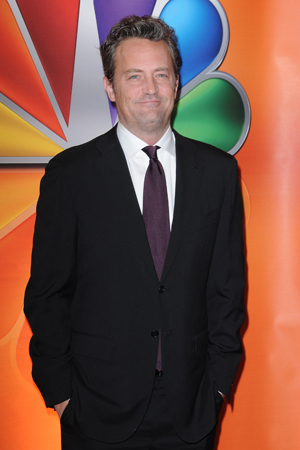 Calling all Chandler Bing fans! Matthew Perry is back on his longtime network, as NBC announced a new comedy starring one of our favorite funnymen of Friends.

“It feels oddly familiar,” said Perry to E! News of being back with NBC. The new fall series, Go On, puts Perry behind the microphone.

“The show is about a guy named Ryan King who looks a lot like me,” Perry joked. “He is a sportscaster and he loses his wife in tragic way and is forced to go to group therapy, where there’s a bunch of kooky characters… Zaniness and hilariousness ensues.”

Don’t hold your breath for a Friends reunion, says cast >>

This is Perry’s third TV project since Friends has ended. His previous two shows, Studio 60 on the Sunset Strip and Mr. Sunshine, were short-lived in comparison to his 10 seasons with Jennifer Aniston, Courteney Cox and the rest of the Friends cast.

He may have high hopes for his upcoming series, but he’s learned to not let his expectations get ahead of him.

“You never know,” he said of his past projects. “Studio 60, everybody thought was going to go on forever, and it didn’t. And Mr. Sunshine… I was kind of glad Sunshine didn’t go as long because I was in charge of that show and it was way too much work. Now I’m just an actor again and it’s nice.”

And as Lisa Kudrow and Matt LeBlanc both admitted that a Friends reunion will probably never happen, Perry put in his two cents.

“I think that’s probably a fair assessment,” agreed Perry, but he still remains open to the idea. “I don’t know, is the answer.”

Check out a preview of Perry’s upcoming hilarious and poignant comedy, Go On: