Ryan Gosling, Sean Penn, Josh Brolin and Anthony Mackey pull a bit of a Don Draper in sexy hats in the new movie about the crime underworld in 1940s Los Angeles. 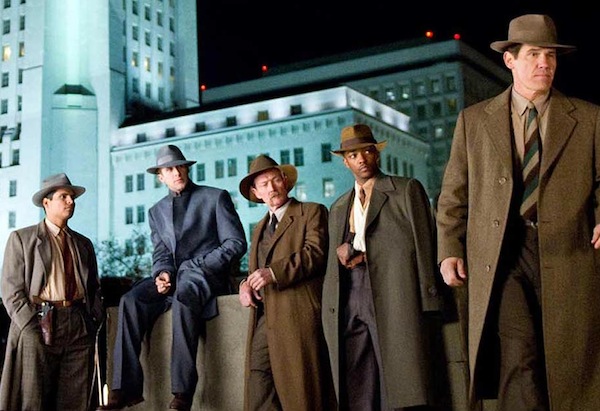 You had me at Ryan Gosling. In a hat. I’m in. The trailer for the most anticipated period piece of the year has arrived. Gangster Squad is a crime movie about the invasion of the east coast mafia gangs to Los Angeles and the police department’s determination to keep them out.

Who’s bad and who’s good? Does it really matter if everyone’s hot? Kidding. We care about the plot, of course we do. Sean Penn plays Mickey Cohen, one of the most notorious gangsters of this era, and he didn’t come to L.A. for a little R&R. This guy means business. Seen in the trailer practicing his right hook on a very unassuming boxing bag, it’s clear there’s gonna be some action in this film. “Back east I was a gangster, out here, I’m God,” he says in a voiceover.

That’s why we have adorable Ryan Gosling to save the day as Sgt. Jerry Wooters. Too bad he’s also got his sights on Mickey’s dame, played by none other than Emma Stone. You’ll recall the sizzling chemistry Gosling and Stone had in last summer’s indie rom-com Crazy, Stupid, Love, which means there’s bound to be trouble with any kind of flirtation between these two. Maybe he’ll take off his fedora and she’ll go dirty dancing right up into his arms (we hope so!).

Ryan Gosling saves yet another life, woman in NYC >>

Anthony Mackey (been in love since Real Steel and Man on a Ledge) in that tight shirt… Hello… plays Rocky Washington. Josh Brolin is John O’Mara, and Nick Nolte is Bill Parker. Machine guns, old cars, vintage L.A. and more fedoras than an episode of Mad Men, this looks like fun.

Is Anthony Mackey remaking The Notebook…? >>