Julianne Moore is about to go crazy for Carrie. The red-haired beauty will turn up the heat in Kimberly Peirce’s adaptation of the Stephen King novel. She’ll play mama bear to a telekinetic and uncontrollable Chloë Grace Moretz. 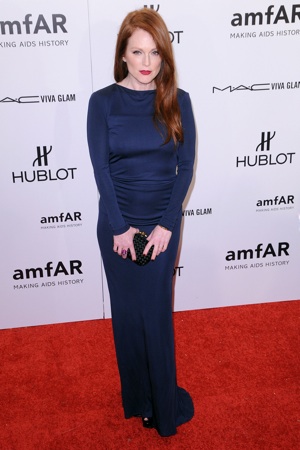 Julianne Moore has gone koo-koo for Cocoa Puffs. The Academy Award-nominated actress has landed the coveted role of a lifetime.

It’s been confirmed that Moore will star alongside Chloë Grace Moretz in the upcoming Carrie remake.

According Deadline, Moore has signed on to play Margaret White, Carrie’s overbearing mother. She’ll be taking over for Piper Laurie, who portrayed the character in the 1976 version.

Laurie received an Oscar nomination (best supporting actress) for her off-kilter performance as a woman taken over by religion and paranoia.

Moretz will star in the title role, which was originally played by Sissy Spacek. Like Laurie, Spacek was also nominated for an Oscar, but in the lead actress category.

Aside from Moretz, another starlet has been cast in Carrie. Her name’s Gabriella Wilde, and she’ll be the new Sue Snell (a role originated by Amy Irving). In Brian De Palma’s adaptation, Sue was a good girl, who got mixed up in the wrong crowd.

She wasn’t Carrie’s friend, but she had sympathy for her situation. Sue was also one of the few survivors of the infamous prom night massacre.

The new Carrie will stick closer to the source material than the previous film. King’s original story is much darker, and less campy than De Palma’s take. The screenplay has been written by Roberto Aguirre-Sacasa, who’s done work on Glee and Big Love.

What do you think Moore as Margaret White? Can she pull it off?