This is a show in search of a hero, a land in search of a real king. “A Man Without Honor” is a good, albeit brutal, installment as we are close to the end for Season 2 of HBO’s Game of Thrones. 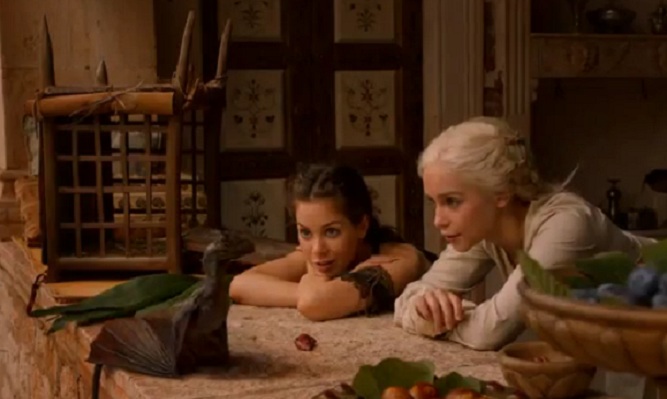 I’m starting to think if we would just get a king in place on the Iron Throne (one who deserved it) — maybe some actual drama and solid character development could replace the repetitive in-fighting and brutality that’s taken over the series. Right now it feels like one long build-up to war.

It’s hard to believe there are only two episodes left in Season 2 of HBO’s Game of Thrones. It was a strange season, slow to start, and now more brutal and explosively violent than the previous season. It was probably more violent than most viewers bargained for. Still, we’re hooked now, whether we like it or not, unable to turn our eyes away from the wreckage that’s before us.

You can’t watch the quasi-historical world of Westeros (that is like a mashup of fairy tale land, King Arthur and the Medieval era) and not think of actual history: Of ancient Rome for example. You can’t help but ask yourself: Are people this brutal? This unforgiving? This bloodthirsty for power? Anyone who’s read anything about ancient Rome will tell you that it was even worse in actual history. The gladiatorial games were so bloody the wooden floor of the Coliseum was covered in sand (to soak up blood) and trap doors opened to drop the bloody remnants below. This is nothing new so it shouldn’t be shocking to see beheadings and hangings, but it still is. In the GOT world, everyone fights everyone and it’s not pretty.

It’s hard not to miss the previous season when characters were grounded in who they were, their House and castle, and the drama played out more slowly. It was a show about more than gore. I still think one of the most missed-opportunities of this season, and biggest disappointment, is sidelining Robb Stark. It was a perfect opportunity for him to step into the role of star — and he would have our sympathies as he attempted to avenge his father’s death, Ned Stark. As it is, he does nothing. We don’t even see him in battle. Robb Stark has no role this season — which is strange considering his war is what is driving all the action of the entire series.

Sidelining Khaleesi also seems to be a mistake, she was a powerful and intriguing force in Season 1. She’s one to root for because as insane as she is, or appears to be, she has a pure motive: She believes the Iron Throne is hers by birthright. Still, the Qarth scenes borderline don’t work. I’m not sure why. For a show that takes great pains to shoot on-location (masterfully), Qarth feels cheesy. It’s as if I’m watching those Star Trek: TNG episodes when Picard would get lost on the holodeck or another planet and learn to play the flute. There’s something about these Qarth scenes that don’t work. Except for the dragons. The baby dragons are captivating and amazing and the CGI is pretty astounding. Let’s find those dragons pretty quickly before I tire of the melodrama that is a white-haired girl with a braid trying to stomp her feet and act serious. And speaking of Rome, who didn’t see the power play/brutal assassination coming a mile away? We all did. The Lady in the Mask is just — annoying. It’s like she’s wearing belt-buckles over her face. None of it works. Let’s get Khaleesi out of Qarth and on her merry way as soon as we can. I don’t care what’s in the books — this is a TV show.

Never trust a Lannister. That’s not a saying but I’m making it up. They are conniving sods. They are like the fairy tale Prince on acid possessed by a demon spirit: That’s Jaime Lannister for you. A distant cousin is held captive at the Robb Stark encampment and imprisoned in Jaime’s cage. The young messenger makes a mistake of opening up to Jaime, telling him he was once his squire. Jaime listens to his tale, nodding emphatically, swapping stories, “I was once 16, too,” until he says I figured out how you can help me escape. How? The boy wonders, “What must I do? I’ll do anything,” and Jaime says, “Die” and then stabs him repeatedly. It’s a nice, touching scene, no?

Jon Snow’s lost in the North Pole of snow and ice with a saucy woman in animal furs who wants to get him laid. I like her accent and it’s amusing to see her tease the ever-serious Night Watch member Jon Snow. She tricks him, of course, she’s a wild “wilding” female after all (sometimes called a “half-wit” by others) and one gets the feeling her people aren’t going to be as accepting towards him as he was towards her.

Meanwhile, back in the dumba** world that is Theon, the newest most unlikable character, he screams at everyone as he sends out the horses and hounds to find Bran who escaped with his Witch-Nanny (said wilding “half-wit”). They cross a river and pass by a farm house and we don’t know what happened until later we see actual burned bodies (they looked really real) hanging in front of Winterfell. Please for all that is holy do not let this be Bran — I don’t know if I can take a young, crippled child being burned to death and hung out at his own castle. Did a mention he’s also fatherless? You see why it’s best not to watch this show while eating dinner (or dessert for that matter). Who knows, maybe it would be better not to watch it at all. Still, I’ve come this far, I can’t turn away. I want to see Theon brought to justice, Joffrey dethroned and Khaleesi to find her stupid baby dragons. Okay, they’re not stupid. Did I just admit that?

Speaking of Joffrey, his captive wife, just a tween, grows into a woman and the mother-in-law from hell, crazy and conniving Cersei, explains that she just “flowered.” Still, in a moment of unspoken tenderness (for a Lannister that is), Cersei and Tyrion exchange looks as Cersei admits her son, King Joffrey, is indeed psycho. She admits this by wondering aloud (the vanity! It’s just a wonder for her at this point) that maybe sleeping with her brother wasn’t the best plan but what could she do? It’s not like they’re the first tribe to do so… she admits finally that Joffrey is just “off.” She doesn’t come right out and say that he’s an insane psycho with major problems but you can tell by the hopeless look in her eye and uncontrollable weeping — she feels this is so. Whether Tyrion felt genuine sympathy for her, or just marveled at her stupidity, was hard to discern. More than likely he’s plotting ways to take over as King Tyrion and correct her grammar and word usage. Tonight we learned that Cersei should not have said her father was good at war “strategy” but “tactics.” Hm. It’s funny but seems a typical Lannister nitpicky point.

Arya, our beacon of hope in this darkness, seems to live in one room on this show: The dining room at Harrenhal. She bears cups and cleans dishes to Tywin Lannister. Tywin likes her, likes her pluckiness. She’s a true heroine. Arya, like all true heroines, was always told she was “too smart for her own good.” Tywin corrects her “m’lord” and says if she wants to pass as a commoner, and not a noble, she should change her speech. We wonder if he knows she’s in disguise and who she really is. My bet’s on Tywin knowing everything. He’s just that kind of guy.

Last but not least, the noble Catelyn confronts Jaime Lannister, the “kingslayer.” She won’t let a guard avenge his son’s death but she, and her trusty Amazonian-like knight, enter his cage/cell and confronts him. Jaime proceeds to push all her buttons, taunting her with the fact he killed her husband and trying to get inside her head about her husband’s bastard son (Jon Snow). At this point, it’s difficult to decide which is more vile: The horrible things he says to Lady Catelyn or the brutal killing of his cousin the messenger. Jaime’s no good. Catelyn Stark asks her loyal lady knight for her sword and before we can see more bloodshed we mercifully end the episode. Next week, we will hopefully learn that Bran is not dead and Jaime and all the others — will get what they deserve. Most of all, we will hope to get a view of those baby dragons again. Those little fire-breathing monsters kind of grow on you.