Chevy Stevens burst onto the psychological thriller scene with her intensely creepy novel, Still Missing. Whether readers loved it or hated it, they agreed that it was compulsively readable, and they raced to finish it. Now Stevens’ second book, Never Knowing, is being released in paperback, and it’s just as incredible as her first. We stayed up late, breathlessly reading this book, which is why it’s our Red Hot Book of the Week.

If you’re looking for a heart-pounding thriller that will leave you gasping for air, Chevy Stevens’ books are the ones you need to be reading. Intricate, complex and incredibly suspenseful, her novels feature 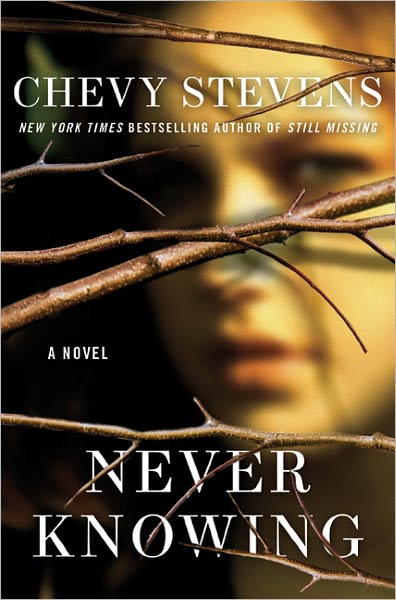 female main characters who have reserves of strength of which they were unaware. Just as in Still Missing, a novel about a woman who is held captive, Never Knowing maintains its brutal intensity from beginning to end. Readers won’t be able to put it down, as the story becomes more complex and they wonder whether Sara will collapse under the strain.

Sara Gallagher has always been a bit neurotic, but she has a pretty good life. Her fiance loves her, and her daughter is beautiful and healthy. She has always wondered about the truth behind her origins — after all, what adopted child doesn’t wonder about her birth parents? Why they chose to give her up? It doesn’t help that her adoptive parents have never been quite as loving toward her as they have been to her sisters, their natural daughters. One day, Sara’s curiosity overwhelms her, and she begins to search for her birth mother.

Sara never really expects to find the truth, but she is fortunate enough to find her birth mother, Julia, who not only has no interest in her, but also is incredibly rude to her. Sara keeps digging, and when she uncovers the truth behind her father and why her birth mother wants nothing to do with her, she wishes she could unlearn the information. Julia was raped by a serial killer, and she was the only one of his victims that he left alive. Sara’s biological father is a brutal, psychopathic murderer.

Distraught by the news, Sara wants nothing to do with the search any longer. But she knows that her father, dubbed “The Campsite Killer,” is still out there somewhere — he was never caught and punished for his crimes. When Sara learns that the police have a plan in place to lure her father out, and she is the bait, she’s torn. She wants to keep her life simple and protect her daughter, but at the same time, can she say no to a plan to bring a killer to justice? Can she say no to the chance to meet her birth father?