On HBO’s Veep this week: Selina has a boyfriend. She likes to talk sexy to him. She also keeps up with her habit of making verbal gaffes putting her staff into overdrive to clean up her verbal road-kill. 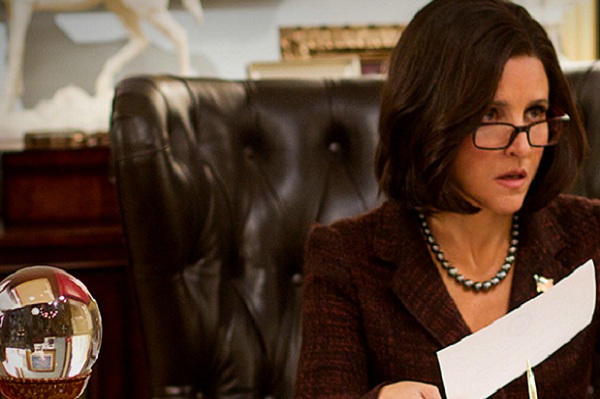 Selina about to go ballistic on her staff, wait is that a crystal ball on her desk!??

Selina’s staff do damage control on her verbal gaffes, as usual. In this week’s episode, the Veep’s staff are forced into making a back alley deal; in politics — compromise is the name of the game. (In this case, it’s a back of the rib-house restaurant deal with two conservative blowhards.) Selina wants what she wants — her boyfriend and her bill passed. She usually gets it.

Selina’s meltdown at her staff as they move into inevitable damage-control mode: “I’m the Vice President of the United States you stupid, little f***ers!”

We’ve all been there: Experienced the almost comedic bureaucracy that can be government at times. (I’ll never forget my rude awakening when I worked as a young Page in the local Senate: Politicians snored, watched TV and read newspapers at their desks — on the House floor — all while they were supposed to be voting! Most were simply absent.)

That’s why Veep is such a breath of fresh air. Especially on HBO’s heavy Sunday night lineup we need some lighthearted entertainment like Veep. Poking fun at politicians is always a good thing.

Veep is a fictional show that parodies D.C. politics. So far it’s managed to walk the line of comedy with potentially unfunny political issues like immigration, filibuster reform and big oil. Until now Veep managed to side-step any allusions to real political events; we don’t even know what party Selina’s a member of (though we can guess). However, a series about a Vice President can only avoid “real” politics for so long and episode four, “Chung,” alludes to some real world political moments.

Vice President Selina Meyer gets caught in her own “birther” controversy when she mistakenly announces, after her Meet the Press interview, that Governor Chung of Minnesota is “not American.” (A direct nod to President Obama’s “birther” controversy from the dark, ether regions of the Internet.) Selina had information, or so she thought, that Chung was not born in this country. Selina’s remark comes not from a small-minded place but a place of insecurity (making it pretty funny): Chung’s a possible political rival. Her remark is not made during a stump speech: It’s made off-the-cuff when her mic (or so she thought) was turned off. The humor in Veep always follows Selina’s foot-in-mouth syndrome as her aides attempt, usually unsuccessfully, to do damage control. (Amy sends Gary over to try to fix it — not a wise move for socially-awkward Gary.)

Selina then usually curses at her staff as they bumble around and someone’s usually fired or at least yelled at. (Goodbye, Scott, it was nice not knowing you!) It’s pretty funny. This show is frothy entertainment. Selina is worried because Chung, an Asian-American war hero, is gunning for office. Chung wants a shot at either the V.P. spot or even the Presidency. Damage control for Selina’s politically incorrect comments are an inherent part of every episode of Veep. But we don’t mind. It’s a comedy of errors inside the Beltway. Her staff goes into full damage control until they are “saved” by Jonah with happy horrible news that a crane has fallen and taken over the front page headlines. Selina must go visit the hospital on behalf of the President. Meanwhile, Selina’s previous “un-American” comments make it to TV and it spirals out of control from there.

Selina visits a hospital with the survivors. Her phony sympathy is funny and even more so when the survivors want to give her a round of applause for her politically incorrect comments. It’s no surprise that this is a nod to Sarah Palin — the female Vice Presidential candidate (and subject of a Tina Fey impersonation). Palin was often accused of stoking populist “fires” on hot button issues. The hospital scene was a bit jarring. In the face of a tragedy, most Americans aren’t going to be focused on political small-mindedness but will be more compassionate. To the show’s credit, they walk the line pretty well between serious political issues and comedy.

Previously, one of the Veep’s backers on her filibuster reform bill (the Clean Jobs oil guy) backed out. It is a fact of politics that you must compromise to get what you want. Selina’s compromise involves her aides taking ultra-conservative fat cats out for ribs to sweet talk them into a deal. (They are politicians Mike refers to as one step closer to “banjo music” and wearing “pointy white hats.”)

Amy and Dan do make a deal with them. Selina wants her bill passed. Dan admits he’s impressed by Amy’s walk on the dark side as she “sold out” and compromised so Selina’s bill could pass. The start of the episode had the two of them at Chung’s book signing. Chung asked Dan to come down the ladder of working for the Veep to work for him — a mere Governor. Amy tells Chung that Dan only climbs up ladders to which Chung replies, “sometimes you have to go down to go up.”

After the compromise dinner, the two aides walk back to the Veep’s office discussing their meeting.

Dan: “That was dark, you’ve gone up like ten levels in my estimation.”

Dan: “Sometimes you gotta go down to go up.”

Selina grows more likeable with each show. Some of the storylines (Clean Jobs) feel repetitive. It would be nice to see Selina outdoors, the show feels stage-bound at times. Veeps are not Presidents to be sure but they still have duties. It would be good to get a sense of those.

Julia shines in her classically fashionable clothes and “gorge” hair, that’s for sure. The most awesome thing I cannot help but wish for in every episode is that — Selina gets to step into the President’s shoes. The show is funny but we are always waiting for something to happen. Nothing ever quite does. It’s like Waiting for Godot in the Washington political arena. We are in purgatory.

And yes, the President is still not taking her calls but Jonah will pop in (in Sunday Bermuda shorts) to issue POTUS’S edicts for her talking points. In the Veep’s world, some things never change.

Here are the things that did change this week — what we’ve learned:

Selina has a lover and she likes to talk in euphemisms and clever innuendos. She tells her lover/boyfriend with a throaty chuckle: “I want you to drill me in my Oval Office, your finger on the button, and come into my Rose Garden.” You know the writers had fun with that one.

Dan is not hard on the eyes and also it’s fun to watch his unapologetically shark-like qualities. It’s funny when he networks for sport, has the answers the others don’t and takes over a sofa outside the Veep’s office as his own personal office. In this episode we learn he has five suits. Oh and Dan will only go so far in “selling out.” The Arizona conservatives are not getting a border fence because “ironically it would have to be built with immigrant labor” to be affordable. Nice. Who knew he had it in him.

Amy does not like it when Gary slobbers his noodles onto his chin. We learn that she is not thrown off by some stuffy old school dudes who want to call her “sweetheart” she’ll talk them into where she wants them and joke with the best of them. Although she might feel bad about it after.

Gary is not the most socially adept. Although he is loyal to a fault. He doesn’t have very exciting Saturday nights either. He spent his hunting for a zipper to replace the broken one on the briefcase he carries everywhere.

Mike. Mike is just so funny. He likes the Eagles and the Grateful Dead. He wears tangerine orange pants on a Sunday. He falls asleep in the limo of the motorcade. He cannot operate remote controls because as Selina says, “Mike, don’t touch that remote. You’re gonna launch a nuke or something.”

Jonah is just Jonah. Same as always. It’s hard not to wish, every time he enters the Veep’s chambers, for him to say: “Madame Vice President, you’re needed at the White House immediately.” We got a taste of it in one episode but it was short-lived. Oh and we learned that Jonah may have been raised by wolves. According to Amy, this explains his lack of social skills.

Perhaps, in the Veep finale, there will be a climactic moment when the President finally does, indeed, call. That might push it over the top or it might just be what Selina’s been waiting for.