After a public divorce and becoming a single mother, what’s left to look forward to? According to Heidi Klum, absolutely everything — including her 40s! 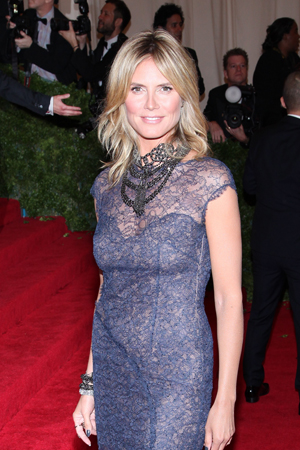 It feels like the world as you know it is over when your marriage ends. However, after filing for divorce from Seal after seven years of marriage, Heidi Klum is looking up and forward to better things.

“I feel good,” said the host of Project Runway to E! News. “I’m not complaining.”

Did Heidi Klum spill the deets on split? >>

The supermodel turns 39 next month, but age — like single motherhood — isn’t something that scares her.

“I just posted on Facebook a video from when I was 18 and I won [the German televised modeling competition] Model 92,” Klum said at the Mondrian Hotel while promoting Clear Scalp & Hair Beauty Therapy, a new line of shampoos, conditioners and other hair care products. “I’ve changed a lot. It’s like, who is that person?”

In fact, Klum reflected that she is actually looking forward to her 40s, an amazing decade in which many other women truly begin to thrive.

“I think between 40 and 50, you just have to give it your all,” she explained of her optimism. “You just have to do it all. You’re still somewhat young.”

So what about after all that? “When you turn 50, that’s when we’re getting a little more settled, more quiet.”

Klum wasn’t always this calm and positive — back in March, she mentioned to Elle her feelings about the split. “I feel like I’m in the eye of a tornado,” she said in the April issue. “It’s emotions inside of your body that are a tornado. And then the outside world doing all this craziness — with you wanting it or not wanting it — is another tornado. But as hard as it is, so is life.”

She continued, “Sometimes I think a curveball just comes at you. Instead of something straight that you can catch, it hits you in the head from the side that you didn’t expect.”