Did Carmen Electra decide to call it quits with her longtime boyfriend Rob Patterson? 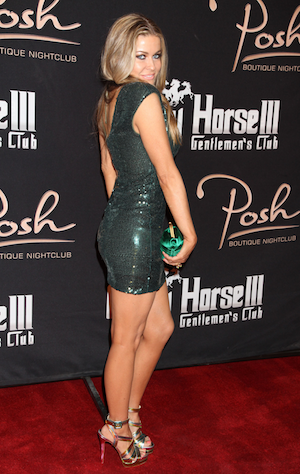 Carmen Electra became engaged back in 2008 to rocker boyfriend Rob Patterson of the group Filter. Recent reports surfaced in the past week that Electra called the wedding off. It turns out… that’s totally not true.

Rumors went wild this week when it seemed that Playboy and Baywatch star Carmen Electra called off her engagement to beau Rob Patterson. Life and Style ran a story that Electra ended her four-year engagement to musician Rob Patterson, but the pair remained together. However E! News spoke to a source close to Electra who says those rumors are completely false. “Totally untrue,” said E! News’ source. No word yet from Carmen Electra on if she is — or isn’t — headed for wedded bliss.

In 2008 Carmen spoke to E! News and didn’t seem in a rush to walk down the aisle. “I feel like being engaged feels nice, because it’s a commitment but there’s no paperwork.” She continued, “And, um, I dunno. I feel like we’re happy, so why — I dunno, there’s no reason to push it to the next level when we’re content and we’re happy the way we are.”

Carmen Electra rose to fame in the 1990s when she starred in Baywatch and MTV’s Singled Out. Since then Electra has appeared in numerous films, most recently in Meet the Spartans (2008) and Disaster Movie (2008) — both films were parodies.