Jessica Simpson is reportedly getting $800,000 to show off baby girl Maxwell Drew Johnson in a upcoming People spread. Who else has earned big cash for a few baby pictures? 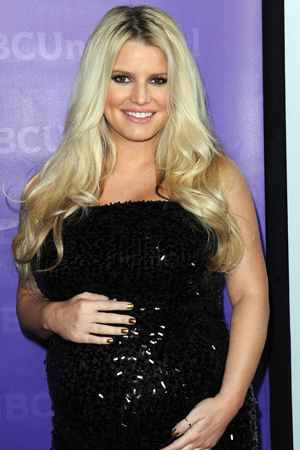 Jessica Simpson is set to increase her billion-dollar empire by $800,000, thanks to People magazine. The new mom of baby Maxwell Drew Johnson has reportedly sold her photos to the weekly entertainment magazine for the six-figure amount, sources told Women’s Wear Daily.

$800K might seem like a lot, but it’s a drop in the bucket compared to an estimated $3 to 4 million she’s getting in a Weight Watchers deal to “lose a significant amount of weight,” according to the New York Post.

“The deal is in place, and after having her baby, she’ll start with Weight Watchers to lose her baby weight,” a source told the paper.

Wowza! The celebrity baby business is booming, apparently. We’d have a baby every year for that kind of cash (we kid, we kid… maybe).

Not every celebrity sells their baby pictures, though. Beyoncé and Jay-Z opted to release the photos of baby Blue Ivy Carter via a Tumblr blog.

“We welcome you to share in our joy. Thank you for respecting our privacy during this beautiful time in our lives. The Carter Family,” Bey and Jay wrote.

Hey, to each their own – we can’t hate on celebrities for getting paid for photos, especially if magazines are ready and willing to buy. Plus, it seems like Simpson is more than happy to talk to the world about her new baby girl.

“I am so in love with baby Maxwell. I want to cry every time I look at her. Motherhood is by far the best thing I’ve ever experienced,” she tweeted on May 8. Aww!