Hilary Duff says labor and delivery are super easy as long as you’re not hungry and motherhood is totally awesome. See what else she had to say about her perfect journey on The Ellen DeGeneres Show. 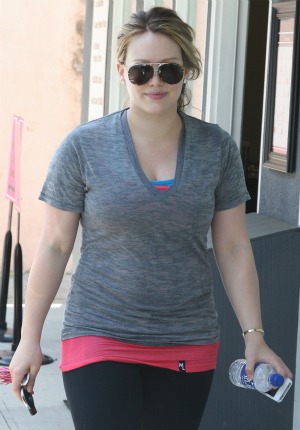 New mom Hilary Duff says labor was easy-peasy and her baby is already sleeping through the night. Thank god she hasn’t already lost her baby weight or else we’d have to kill her.

In a special Mother’s Day edition of The Ellen DeGeneres Show, Duff explained her labor story and why she looks so rested with a newborn at home.

“It was very easy,” she explained. “I went into labor at about one in the morning and I very calmly had my bags packed and woke my husband up after about three hours of walking up and down my hallway. Then I’m like, ‘Okay, it’s time to go, let’s go now.’ We got in the car and drove to the hospital and that was it.”

Hilary Duff shows off her new son on Twitter >>

Mom Susan and sister Haylie joined her for the birth — but they almost missed the grand finale because they were hungry. “We wait all day and everyone is hungry. We’re southern and from Texas and my mom and sister actually went down to the commissary to the food court area,” she said.

“Things start rolling and all of the sudden the doors bust open and my sister and my mom come flying in and they’re like, ‘We got barbeque chips and root beer, guys!’ I’m like, ‘What? I’m pushing.'”

Duff also revealed she has some kind of miracle baby who sleeps through the night already at just 7 weeks old, despite the fact that he’s supposed to wake every four hours to eat.

Jessica Simpson and other celebs who popped this year >>

“I feel weird, because it seems like I’m bragging, but he sleeps from like 11 to six. It is possible, ladies,” she said. “It didn’t happen right away, but the past three weeks, he’s an 11 to 6er.”

So basically motherhood is pretty much the best thing that has ever happened to her. “Every single day, it seems like there’s a new face that they’re making,” she told DeGeneres. “He started to smile about a week ago, and that’s the coolest experience. It’s all good.”

“What is to come is such an amazing journey, and a lot of work,” Duff explained to the moms-to-be that filled the audience. “It’s just like the best thing that’s ever happened to you.”

Happy Mother’s Day to you, Hilary!