Sacha Baron Cohen is known for playing outlandish characters and interacting with real people who don’t realize he’s an actor. But in The Dictator, Baron Cohen sticks to a script and employs some of Hollywood’s most hilarious actors, making for a wickedly funny, but very politically-incorrect comedy. Let the depraved laughter begin! 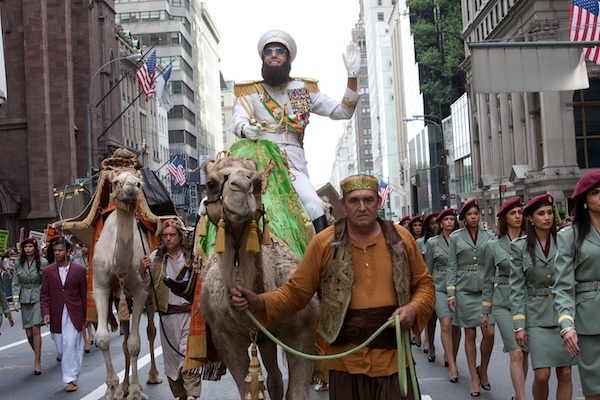 The film opens with the words In “Loving Memory of… Kim Jong-Il” and shows that ubiquitous photo of the deceased North Korean dictator’s frowning, pudgy face. Yes, that’s “dictator humor” and clearly sums up the savage comedic mind of Sacha Baron Cohen. There is nothing too sacred or taboo for Baron Cohen to lambaste, and lavishly lambaste he does. All races, genders, sexual orientations and religions are fair game in his world, including American foreign policy. But we know from Borat and Bruno, he particularly enjoys satirizing Arab culture. This makes for edgy, bold comedies, but has also earned him death threats from a Gaza militant group. Baron Cohen is a man who lives to takes risks — which is a lot more than most in Hollywood can say when the big studios are all remaking franchises like Dark Shadows and The Three Stooges.

Baron Cohen plays Admiral General Aladeen, the dictator of a fictional North African country called the Republic of Wadiya. Aladeen is a murderous megalomaniac (Gaddaffi, anyone?) and sends all rebels straight to his executioner. British actor Sir Ben Kingsley plays Aladeen’s not-so-loyal brother, who has a secret plan to depose the dictator. But both brothers have much on their plates, especially with Osama bin Laden’s residing in Aladeen’s guest house ever since Bin Laden’s body-double was killed. It’s little details like these that make the film zing.

Once Aladeen is in the U.S. to speak at a U.N. Council meeting, he realizes he’s been duped by his brother and handed over to the U.S. for questioning. Failing to be intimidated by any of the C.I.A.’s sissy torture techniques, he walks out a free man only to realize his own body double has assumed the dictator’s identity.

Aladeen, now going by the name Allison Burgers, meets up with human rights activist Zoey, played by a spirited Anna Farris in recycled-fair-trade-organic-cotton-overalls and a pixie-cut. Mistaking her for a boy, he gets a job working in her organic grocery store and abuses her staff and customers. Zoey struggles to understand him, almost making it her personal quest in human compassion to somehow find the best in this over-the-top misogynist. When Aladeen helps with an emergency child-birth, he is disappointed when the customer delivers a daughter — and he promptly asks for the trash can. This is the wicked and biting social satire for which Baron Cohen is famous.

The Dictator is most fun when it mixes up genres and cultures. The film wittily underscores the pseudo-emotional moments with popular American songs like REM’s “Everybody Hurts” and Dolly Parton‘s “9 to 5” but surprises when you realize the lyrics are being sung in Arabic. The scene in the helicopter where Aladeen is speaking a mix of Arabic and English in front of American tourists — describing his new Porsche ” 911,” and making exploding sounds imitating the fireworks at the Statue of Liberty, had me laughing and cringing at the same time.

Bottom line: If you accept that satire’s ultimate purpose is to provide constructive social criticism, then get a babysitter, sit back and relish this twisted politically-incorrect comedy that will have you squirming and laughing to the end.