Gossip Mark Consuelos was once a stripper is debatable no more! Kelly Ripa has confirmed her hunky husband did some time as a go-go boy in his post-college days. 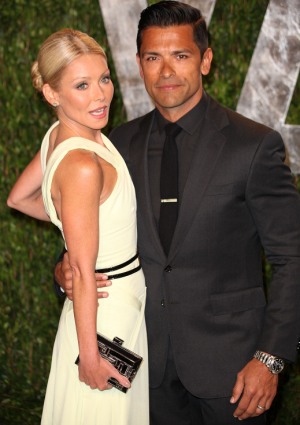 Mark Consuelos‘ stripping past has been confirmed by his loving wife, Kelly Ripa, who has no shame in admitting the father of their three children once went by the profession of go-go boy.

In an interview with George Wayne, for the upcoming June issue of Vanity Fair magazine, Kelly Ripa happily chatted about her 41-year-old husband’s long ago days of taking it all off.

Broaching the subject of Mark Consuelos’ stripper days Wayne said to Kelly Ripa, “I found out in the National Enquirer that he was once a go-go boy, a male stripper.”

“He was,” the Live! With Kelly host reportedly responded. “A lot of hot guys in Hollywood have done that.”

Elaborating on why Mark Consuelos turned to stripping she continued, “He was straight out of college, and he went to Notre Dame and finished his degree at the University of South Florida. So, there he was in South Florida, he’s looking to break into show business, so he started off as a roadie to a group of these guys, and then they talked him into stripping.”

Though Kelly Ripa has happily sat side-by-side with hubby Mark Consuelos a number of times since Regis Philbin’s departure from the morning show, she insists neither of them want him to take on the gig permanently. Speaking of the possibility she has commented, “No one would make me happier than Mark, but he values our marriage and he says that he doesn’t see how we could stay married and both do that show.”

Understandable, but what we want to know is why experienced stripper Mark Consuelos wasn’t tapped for a part in Magic Mike? Now that we know he’s got the skills it’s time for a performance!