Russell Brand is set to work with MTV again as host of the 2012 MTV Movie Awards in June. If Katy Perry shows up, just how awkward will it be between them? 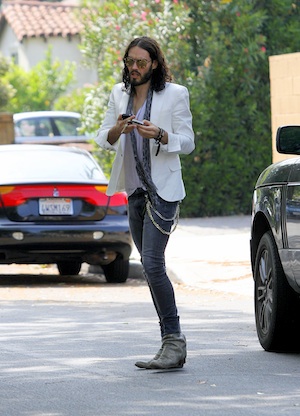 Brand is confident the show will meet fans’ expectations. “This MTV Movie Awards will be more impressive than The Avengers and you won’t have to wait an hour for someone to Hulk out.”

MTV is excited about bringing Brand back as host. Executive Producer Jesse Ignjatovic could barely contain his excitement in the official announcement. “He brings the funny but he also has that rock n’ roll aesthetic,” said Ignjatovic. “I think Russell’s the perfect host for this show. He’s a movie star. He’s probably one of the most brilliant stand-ups that I’ve seen in his time, and he’s a rock star.”

“Whatever we end up creating around him within the show, he brings that danger thing as well,” Ignjatovic said. “We’d love for the show to live there, where you don’t know how he’s going to react to something in the moment. He’s so sharp and witty and on his game that that’s an exciting place to live.”

Ignjatovic couldn’t say enough good things about Brand. “He has amazing comedic chops. He’s brilliant. He touches all of the areas that I think are important to us.” He finished his comments with an appreciation for Brand’s work ethic, “Add to that I think he’s one of the most professional people I’ve worked with in terms of comedians. He’s well-studied and very dedicated to his craft. I think we are fortunate he said ‘yes.'”

Russell Brand’s personal life was very much in the public as he split from pop star Katy Perry earlier this year. No word yet on if Perry will attend the show or if Brand will mention his divorce on stage.