Jon Hamm, the dapper man best known as Don Draper, has a bit of advice for teenage girls out there. Watch as the star, now signed on to the leading role in Million Dollar Arm answers questions from the World Wide Web! 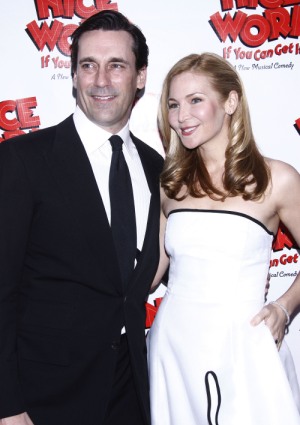 Jon Hamm is here to advise on the social dilemmas facing teen girls today. The Mad Men star recently took on questions from young fans in a web video called “Ask a Grown Man,” tackling dating drama and the gas we all pass.

Reading aloud a question sent in to him, Jon Hamm said to the camera, “One day a guy wanted to get with me, and the next, he changed his mind. What do I do with this flip-flopper?”

The 41-year-old, longtime love of actress Jennifer Westfeldt, went on to advise, “You’re 16-ish, so I’m assuming he’s the same age. Give the guy a break. Maybe he changed his mind. Maybe you’ll change your mind.”

“You’ll be just fine,” he continued in the video for teen site Rookie. “The world’s your oyster. If a guy doesn’t want to get with you, don’t sweat. There’s a lot of guys out there. Don’t define yourself with who wants to get with you. I’m sure you’re a lovely person.”

During the 4-minute video Jon Hamm went on to tackle the subject of teen girls finding their own sense of style, but then was nearly stumped when posed a question on letting the flatulence fly in front of one’s significant other.


“I was under the impression that girls never farted so I don’t feel like I am capable of handling this,” the Kim Kardashian-hating actor jokingly said with a straight face. “Of course everybody farts,” he went on to say. “Go and read that book Everybody Poops. It’s the same thing.”

After advising another puzzled pubescent that making out is “super fun,” but anything more sexually active the best bet is to “slow your roll,” Jon Hamm signed off.
“Well these have been my five questions. I hope I’ve been helpful. I’m 41 years old. It doesn’t mean you have to pay attention to me,” said the actor, who’ll soon take on his first leading role in the sports flick Million Dollar Arm. “You’re probably all too young to watch Mad Men, so I don’t know. Enjoy The Hunger Games.”