In Tuesday night’s Private Practice, Amelia tried to heal a pedophile, Jake tried to heal Amelia, and Pete made a controversial decision that could jeopardize the hospital. 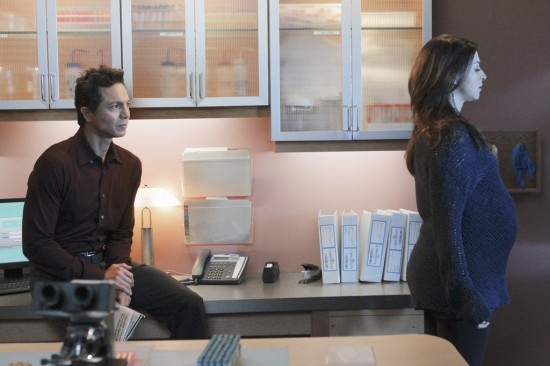 Fewer than 24 hours before the real-world American President would take a public stance in favor of marriage rights for same-sex couples, Private Practice placed hospital visitation rights at the center of “Drifting Back,” an episode that proved a little more nuanced than most others this season, even as it kept Sam and Jake and Addison in the very same petty triangle they’ve been dancing in for weeks.

The primary hospital case in “Drifting Back” involved Troy and Roger, a 30-something couple going through a major medical crisis. Troy entered the episode as a man at death’s door — his heart rate was crashing due to cardiomyopathy and, even as Pete rushed to save him, pretty much everyone at Seaside Wellness knew there was little to be done. Within moments, Troy was intubated.

But this sort of procedure, Roger told Pete, was not what the catatonic Troy desired. According to Troy’s journals, and according to discussions he had had with Roger, Troy wanted no life-saving machines and no prolonged death. But the lack of any legal recourse (as far as the law and Troy’s disapproving dad, Carl, were concerned, these men were little more than “roommates”) put Pete and the hospital in a tight spot. It also put Roger outside of Troy’s hospital room, unable to stay alongside the man he loves.

This whole scenario didn’t sit right with bull-headed, do-gooder Pete — a guy who, just last week, was prepared to board a plane to El Salvador to help a woman in jeopardy. Despite Charlotte’s pragmatic warning that disobeying the law to help Troy could jeopardize everyone at Seaside (“It doesn’t matter how we feel about it. The law is clear.”), and despite Sam’s reluctance to challenge the system, Pete allowed Roger to spend his nights at Troy’s bedside and, eventually, removed Troy from his machinery without Carl’s consent. In the end, Pete was arrested for murder.

Pete’s arrest, unfortunately, came right on the heels of his and Violet’s decision to try to make their relationship work (a serious case of déjà vu, for anyone who has been watching for the last three or four weeks). Now it looks like all of that warmed over heart-to-heart stuff will have to wait until Dr. Wilder gets out of the clink.

Meanwhile, Jake helped Amelia prepare for the impending delivery of her baby as Amelia periodically lashed out at Sheldon (recently returned from an island trip with his ex-wife) for not being there for her in her hour of need. In one particularly aggressive moment of desperation, Amelia urged Sheldon to have sex with her as a way of taking her mind off of her pregnancy and her addiction. He refused, and their conflict gave birth to one of the better put-downs of the season: “Go away. I’m busy growing a brainless baby. It takes most of the energy I would waste talking to people like you.”

Fortunately, Amelia found the comfort she needed (though, not the sexual kind) in her growing bond with Jake, who gradually recognized warning signs that Dr. Shepherd might be on the verge of slipping back into drug use. Though Amelia initially rejected his suspicions, Jake eventually got her to concede that the thought of falling off the wagon had, in fact, crossed her mind. But when Jake shared his own experience with the horrors of addiction (his wife died of an overdose) and the effects it can have on a family, Amelia came to realize she needed to put the needs of her unborn child before her own yearnings.

She was also tested on the professional front, as a patient named Rich admitted to harboring sexual urges for his daughter. After Rich suffered a seizure at the hospital, Amelia discovered a lesion on his temporal lobe that, she deduced, was likely causing his inappropriate thirst for sex. Sheldon expressed concern that Amelia might not be up to the task of removing the lesion, but Amelia was characteristically blunt in her dismissal of his opinion. “Don’t for a second assume I don’t know how to compartmentalize,” she told him. “That’s the only way I survive.”

And so, by completing a high-risk neurosurgery, Dr. Shepard cured Rich and likely herself. Her heart-to-heart with Jake about the dangers of addiction pushed Jake towards understanding the need for connection with others at the hospital (especially Addison), and her confidence under pressure was a nice reminder that this is ultimately intended to be a show about doctors helping patients at the worst times of their lives.

Next week we’ll see how Pete handles confronting what very well might be the worst time of his.