Hollywood comedy darlings Anna Faris and Chris Pratt are taking on a new project: Parenting! Find out all the details about their upcoming bundle of joy. 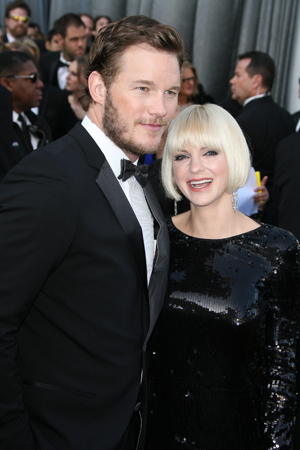 Two of our favorite comedians are finally expecting a baby! Anna Faris and Chris Pratt announced — through their rep — that they’re going to be parents from the first time the fall.

The couple has planned on kids since marrying in 2009. “Chris wants a big family,” Faris told People. “I do want a lot of kids, [too.] We want to populate the world!” she added to US Weekly.

The couple met on the set of Take Me Home Tonight and married a few months later. They also starred together as co-dependent lovers in 2011’s What’s Your Number?

“I married way out of my pay grade. I have no idea how that happened. She’s so g**damn funny and so good,” Pratt told GQ recently. “She is a legit comedy powerhouse. But I’m not going to question it too much. I don’t know what it is, man. I guess chicks dig love handles or something.”

The couple even made a sacrifice to get prepared for parenting: They gave away Faris’ elderly cat, prompting death threats toward Pratt on Twitter.

“To those of you somehow hung up on the notion that I kicked the walker out from underneath our cat and threw her into the streets, first of all, cats don’t use walkers, so that’s a ridiculous notion,” Pratt tweeted. “Secondly, I found my aging cat a g**damn loving home! Ease up with the death threats for Heaven’s sake!”

Apparently celebrities do have feelings when it comes to insults lobbed at them on Twitter.

“That s*** affects me,” he said. “I’m human. I don’t like being told that I should be ‘put on an ice floe when I get old and incontinent,’ or being called a ‘douche’ or told that ‘prat = a**hole in England. Looks like the shoe fits!’ I know that already!”

The Parks and Recreation star added that they “absolutely cannot have an animal that s**** all over the house” if they had kids.

“If you are a parent you will understand,” he wrote. “And if not, that probably explains why you have such a hard-on for cats.”

A** or not, we’re pretty sure Pratt is going to make one hilarious dad.