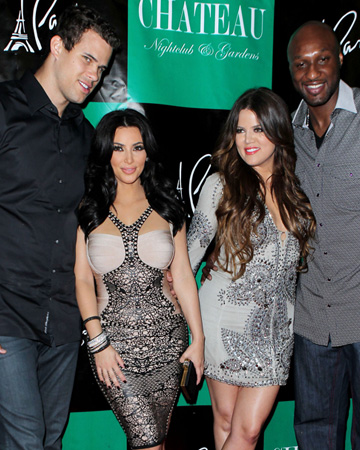 So, we’re taking a new approach. Instead of being the waiting and judging type, we’ve decided to take what we’ve seen and try to learn a lesson or two (or six) to apply to our own relationships. Up today? Two of the Kardashian sisters.

If you watched their reality show, did you really think for one second that it would last?

Just by seeing how they couldn’t compromise on the big things in life (such as where to live, therefore keeping separate homes in separate states… even after the marriage), kind of raised a major red flag with us.

So, Takeaway Lesson #1: It takes COMPROMISE to make a marriage last. In marriage, it’s no longer all about what is best for you anymore! (This is a tough lesson at any age.)

Another big warning sign we noticed (by watching) is that nearly every single person in Kim’s life had a strong hesitation against their getting married; a lot of them even went so far as to say something directly to her. (Oh, the drama!)

And here is where we get Takeaway Lesson #2: When you’re blinded by love, it can be hard to see the truth in a situation. So sometimes it’s worth listening to what your family and close friends have to say about the ones you’re dating.

It was also obvious in the marriage episode (we’re starting to be thankful our lives aren’t a reality show!) that there were some unsettled issues brewing between them, and up to the day before the wedding, they were still barely speaking to each other. But with millions of people watching and waiting (and millions of dollars’ worth of gifts being sent), they went ahead with the marriage anyway.

And since sisters love being compared to each other (OK, so not really), let’s now take a few lessons from Kim’s sister Khloe and her marriage to Lamar.

Granted they got off to an iffy start, getting married after only a few weeks of knowing each other, it seems their stick together attitudes have helped them overcome some incredibly stormy months.

From stepchildren, an alcoholic father (in-law), needy best friends, Khloe’s family and pregnancy hardships… they’ve not been dealt an easy couple of years. Even more recently with Lamar being let go from the Lakers and their move to Dallas and back, it definitely seems as though things aren’t really letting up.

But, what’s impressive is watching how they seem to be working through it together, even going so far as to put their reality show on hold so that they can spend more time together working on their marriage.

Takeaway Lesson #4: Refuse to let the hard stuff drive you apart. By coming together and working through hardships as a team, it will only strengthen the marriage and deepen the commitment. (Hey, we never said these were easy lessons!)

And we think that brings us directly to the final Takeaway Lesson….

Takeaway Lesson #5, brought to you by Khloe and Lamar themselves in their recent statements found in PEOPLE magazine:

“I think what makes a marriage work is honesty, loyalty and prioritizing,” Khloe tells PEOPLE. “And we just wanted to prioritize a little. Life is short.”

“If she has your back, she’s going to follow through,” a soft-spoken Odom says of his wife. “There’s not a tough time or any situation that’s going to deter her. She loves unconditionally.” Adds Khloe: “I’m very protective of Lamar. I hold our relationship sacred.”

Now, who said we can’t learn a thing or two from celebrity marriages?