Sofia Vergara and Nick Loeb were first spotted together in 2010. Now, after nearly two years together, the pair have reportedly called it quits after a weekend of nonstop fighting. 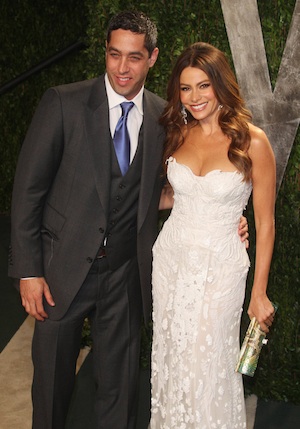 A source for the New York Post source says Vergara made the breakup known to friends on Monday night. “Sofia was confiding in friends at the ball that she and Nick have split. They have been fighting a lot recently and have been on the brink of splitting many times. It it not yet clear if they are over for good, but they are done as a couple for now.”

No word yet from Sofia Vergara on the breakup. Just Jared reports Vergara and Loeb were last spotted at the White House Correspondents’ Dinner but looked “less than happy.” Access Hollywood says some insiders believe Vergara’s sudden fame with the success of Modern Family caused considerable tension in their relationship. Loeb is not in the entertainment industry.

The 39-year-old Sofia Vergara was long famous in her native Columbia before the smashing success of ABC’s Modern Family. In the late 1990s and early 2000s, Vergara walked numerous runways and modeled for swimsuit calendars.