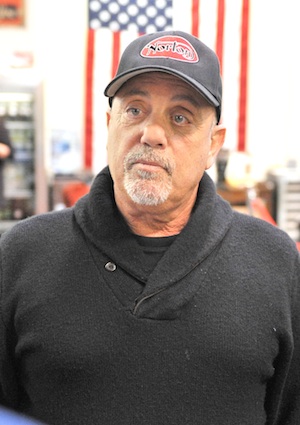 Billy Joel is moving out of his mega Miami mansion. After six years in the palatial pad, Joel listed the property for almost $15 million, about one million more than the purchase price in 2006. The Real Estate Stalker blog has the pictures you can drool over. The home is nearly 9,000 square feet with seven bedrooms and eight and a half bathrooms. Joel’s Miami mansion sits on over half acre and boasts beautiful waterfront views along with 150 feet of private beach.

The Real Estate Stalker reports the home has plenty of marble and other fine stone additions along with a cook’s kitchen, wine cellar and an outdoor kitchen.

The 63-year-old piano man is best known for his music and tumultuous relationships. He married supermodel Christie Brinkley in 1985. The pair split in 1994. Their daughter, Alexa Ray Joel, was hospitalized in 2009 for an apparent drug overdose. Joel himself has publicly battled substance abuse and depression. Joel admitted himself to the Betty Ford Clinic in Rancho Mirage, California back in 2005.

Joel is currently dating 29-year-old Alexis Roderick. His third marriage to Katie Lee in 2004 — at the time Lee was 23-years-old — ended in 2009. According to the NY Daily News, Roderick works for the financial firm Morgan Stanley and told the paper she and Joel “were friends before they started dating.”