Talk about kicking them while they’re down: The Beastie Boys just lost Adam “MCA” Yauch — and now they’re the defendants in a lawsuit about a decades-old song sample. 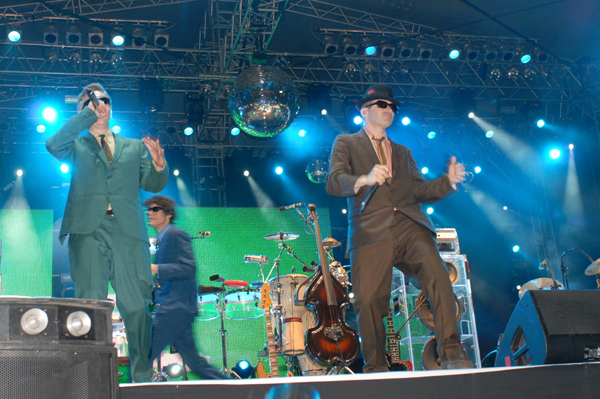 When it rains, it pours: The Beastie Boys are facing a nasty court battle over 30-year-old song samples just days after Adam “MCA” Yauch lost his battle with cancer. The lawsuit — filed in U.S. District Court on May 3 by record label Tuf America — alleges the hip hop group illegally sampled Trouble Funk’s songs “Say What” and Drop The Bomb” for the Beastie’s “Hold It Now Hit It,” “The New Style,” “Car Thief” and “Shadrach,” according to AllHipHop.com.

In court papers, Tuf America alleges that a thorough sound analysis of the Beastie’s albums Licensed to Ill and Paul’s Boutique found similarities in the songs drawn without permission. The label also added Capitol Records as a defendant, saying that the group and label continued to profit off the samples with commemorative re-releases of the two albums.

Yikes. Somehow, we’re doubting that Ad-Rock and Mike D are worrying about the lawsuit right now. The pair both released separate statements earlier this week expressing their sadness over losing their friend to cancer.

“As you can imagine, s*** is just fkd up right now. but i wanna say thank you to all our friends and family (which are kinda one in the same) for all the love and support,” Ad-Rock wrote Monday on The Beastie Boys’ Tumblr blog. “I’m glad to know that all the love that Yauch has put out into the world is coming right back at him.”

“[H]onestly the last few days have just been a blur of deep emotions for our closest friend, band mate and really brother. I miss Adam so much,” he wrote on Monday morning. “He really served as a great example for myself and so many of what determination, faith, focus and humility coupled with a sense of humor can accomplish. The world is in need of many more like him. We love you Adam.”

Our question: Why did Tuf America wait 30 years to figure out the similarities? Seems a little suspect.