Christina Aguilera must be feeling a bit wistful now that the second season of The Voice is over: She finally apologized for being a total B to Tony Lucca all season. 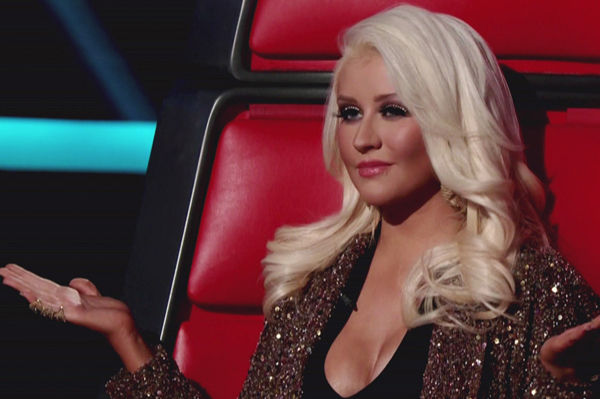 Christina Aguilera may be a lot of things, but she’s apparently not above apologizing when she’s wrong. The singer — embroiled in a feud with contestant Tony Lucca all season — said her sorrys for being rude.

“She just wanted to clear the air a bit,” Lucca, 36, told US Weekly of their private backstage chat, adding that Aguilera “apologize[d] that this became much more of a dramatic thing than she ever intended it.”

Jermaine Paul still can’t believe his win on The Voice >>

The pair have been at each other’s throats for several weeks, despite their history as co-stars on The All-New Mickey Mouse Club back in the mid ’90s. Aguilera started the feud by calling Lucca “one-dimensional” and, most recently, by criticizing his performance of “99 Problems” as derogatory toward women. Lucca eventually shot back at Aguilera by calling her “pathetic.”

Lucca regained his composure during his chat with Xtina. “I said to her, ‘I hope that we can be cool moving forward,'” he told the magazine. “I take pride in the fact that my whole career has been a career of integrity and sound relationships.”

To be fair, he took the high road for most of the season, complimenting Aguilera even when she was trying to undermine his spot on the show.

“I take pride in the fact that Justin [Timberlake] and J.C. [Chasez] and people will go to bat for me. Because of that integrity, I would hate to think that through this whole course that [Christina] and I would both suffer on the backside,” he added. “So, you know, water under the bridge.”

“Her criticism for the most part has inspired me and led me to a higher plane than I might not have found otherwise,” Lucca added. “I’ve tried to turn that all into positive and use it for creative inspiration but I don’t know… maybe this is America’s way of saying that they don’t want to reward this sort of petty back-and-forth kind of thing.”

Lucca came in at third place behind Juliet Simms and winner Jermaine Paul.