Tanning mom Patricia Krentcil lashes out at Snooki, pleads not guilty to child endangerment and tops off her week with news of her very own action figure. 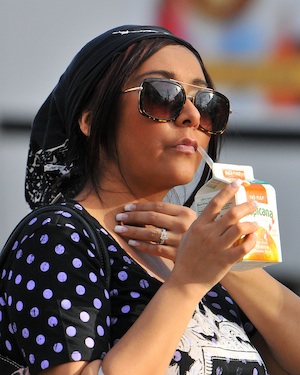 TMZ reports the infamous “Tanning Mom” — Patricia Krentcil — was recently banned from several tanning salons in New Jersey. Some tanning boutiques even resorted to plastering Krentcil’s picture behind the front desk to alert employees. Patricia Krentcil earned the unfavorable nickname of “Tanning Mom” after she made recent headlines for allegedly allowing her 6-year-old daughter to tan.

According to CNN, Patricia Krentcil pleaded not guilty last week to child endangerment charges. She was arrested in late April when her daughter allegedly suffered burns from a stand-up tanning bed at an undisclosed Nutley, New Jersey tanning salon. Krentcil herself is extremely tan and the incident made national headlines while also prompting discussions on the safety of tanning and the appropriate age to allow children to tan. New Jersey state law prohibits tanning salons to allow children under the age of 14 to utilize tanning beds. However children are allowed to accompany their parents into the same room as the tanning bed.

Essex County prosecutors claim Patricia Krentcil permitted her daughter to use the stand-up tanning bed until she burned. Attorneys for Krentcil state the young girl was burned outside, along the lines of a typical sunburn. MSNBC reports Krentcil told the press as she left the courtroom last week she believes the charges against her stem from someone who was “fat, jealous and ugly.”

Patricia Krentcil also lashed out at Hollywood. She told Extra that Jersey Shore star Snooki was “fat” and that she was “disgusting” in response to Snooki’s comments that Krentcil was “crazy.”

A toy company attempted to cash in on Krentcil’s infamy by releasing a “tanorexic doll.” MSNBC reports the action figure is made by HeroBuilders.com and retails for $30. Founder Emil Vicale spoke to the news outlet and wasn’t shy about his company’s intent. “Yes of course she inspired it,” said Vicale. “Why would I make something as hideous as this?” Laughing, Vicale continued, “This is our first ugly doll.”

What do you think of Patricia Krentcil and her possible obsession with tanning?