Against Me! fans will soon have a female leading their favorite band. Tom Gabel has announced he is transgender and will now begin living his life as a female — complete with a new name. 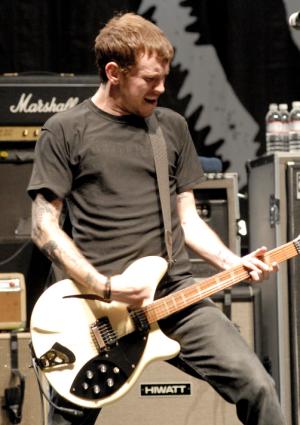 Against Me! rocker Tom Gabel is tired of living a lie, and is therefore going to start living his life as woman. The 31-year-old is heretofore to be known as Laura Jane Grace — and is planning to have gender reassignment surgery down the road.

Speaking to Rolling Stone the Against Me! lead singer confirmed the news, as well as admitted what he’s feared most in the gender reassignment process thus far.

After sharing that he’s dealt with gender dysphoria for years, Tom Gabel is now beginning to transition to life as a female by taking hormones and undergoing electrolysis treatments. The father of 2-year-old daughter Evelyn plans to remain married to his wife, artist Heather Gabel.

“For me, the most terrifying thing about this was how she would accept the news,” Tom Gabel told Rolling Stone. “But she’s been super-amazing and understanding.”

“I’m going to have embarrassing moments, and that won’t be fun,” the Against Me! star went on to say of coming out in the public eye, notably as the first rock star to do so. “But that’s part of what talking to you is about — is hoping people will understand, and hoping they’ll be fairly kind.”

While Tom Gabel may be the first transgender musician to come forward, the public did recently watch as Cher’s child Chaz Bono transitioned from female to male beginning quietly in 2008. Chaz is now living as a man, but has yet to have gender reassignment surgery.

Lyrics from Against Me!’s “The Ocean” give insight to Tom Gabel’s feelings and the reasoning for changing his name to Laura Jane Grace. A sampling reads, “If I could have chosen, I would have been born a woman / My mother once told me she would have named me Laura.”

The full interview with Against Me! rocker Tom Gabel is due out in Rolling Stone May 11.